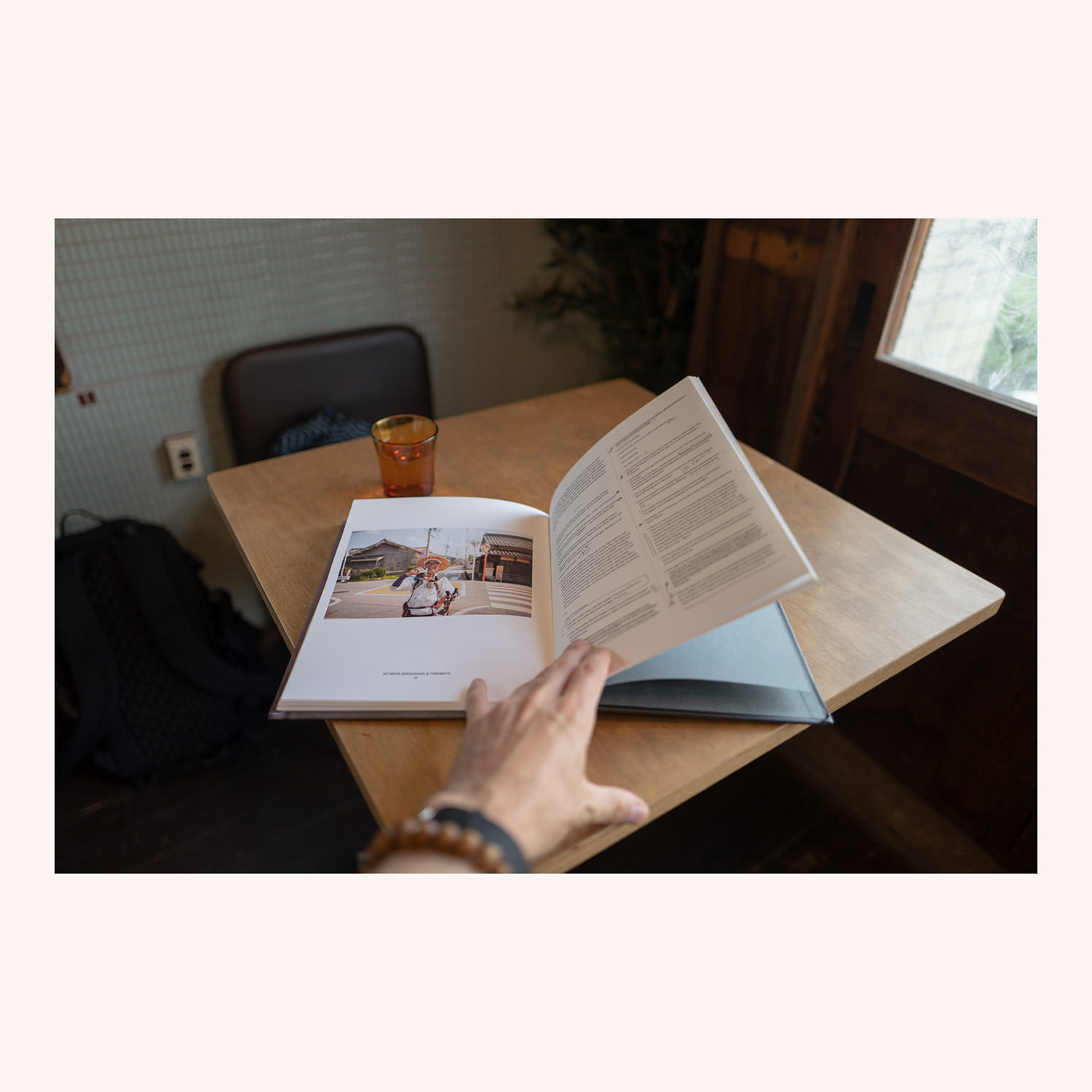 It arrived. The book. Of your responses.

For those of you who don’t know what I’m talking about, this is the book of responses that subscribers sent to my SMS project.

There’s a lot I want to write about this whole process, procedure. Want to pull apart the gangly, floppy loop the project formed between me and the walk and those following along. Anyway, for the time being: THANK YOU to everyone who wrote in. The book is nearly 100 pages, 49 of which are your messages.

Of those messages, a few were questions (or almost questions). So I’ve decided to devote a couple Ridgelines (maybe not all in a row) to responding to some of them, roughly in order.

Do you look at the road as you walk in thought? Do you hear music that corresponds loosely with the rhythm of your stride?

Almost never looking down, always up, around. Down only in the woods when the footing is sketchy, the roots both helpful and harmful. Otherwise too much to see, people to greet, clocks to shoot.

In the head? Coltrane’s “Giant Steps” forever on repeat. Though: No podcasts / music was part of the ascetic ethos. Be present, et cetera. I broke it a bit. Listened to all of Dan Carlin’s Supernova in the East. And Rufus Wainright’s “Poses” became a kind of bizarro anthem when the walking got tough.

Related: I dicta-walked; that is I AirPod dictated essays and diary entries into Notes.app. And with Siri so close, and a little … “Hey Siri, play Poses by Rufus Wainright” so easy to say … it was invoked and evoked more than once.

Are you finding joy in penning your daily recaps over text? Does it feel different to be thinking about a text message in this way?

So much joy. Couldn’t have predicted how joyful those blurps would be. Even not knowing who was getting them. (Maybe especially not knowing.) A forcing function to just remember for a second, really step back and go: What was that today?

And now with this book — swoon. Was joy found? Oh, yes.

I only thought about the SMSes at the end of the day, ice on the knees, tiger balm all over the legs and shoulders, in whatever inn (or Denny’s) I happened to be staying at that night. Otherwise far from mind, aside from the random in-the-moment recognition of: I bet that (some interaction, feeling, insight) typifies today.

I’ve never had a better slide into my DMs

[image that day was a picture of a slide]

I hope u went down that slide at least once…

If I went down all the slides I saw, even just once, I’d still be walking and would be walking a lot longer still. Which is a snarky way of saying there were a lot of slides. And a defensive way of saying: I did not embrace my inner child, did not slide the slide. I think at that particular moment I was having a bit of a confidence shakedown. It looked like I was going to walk a marathon length that day (and did!) and I (my body?) was wondering: Can I (we) do this?? Not just today but day-after-day-after-day? I didn’t know! It ended up working, the body delivered, but … the whole endeavor landed right on a razor’s edge of too much.

I did hop on a swing at one point, all alone, and ate a pain au chocolat, somewhere just outside of Karuizawa. A cat and me, a swing, light drizzle, butter-greased flakes falling from my chin down to the hard playground dirt. (That day I walked 47 km.)

I imagine it’s both refreshing and unremarkable to be texting into the ether without any instant gratification or feedback.

Not only remarkable but ideal.

The book, the final (?) artifact, further hammering home the idyllic nature of the system. I returned to the always-connected world mainly to feel like the feedback loops are all too tight. If the walk taught me anything it’s that I mostly don’t need to know anything this very second. And for most things happening in the world, it’s much better to know about them tomorrow, than today.

Opening Twitter now straight up freaks me out. (I feel like the cat who lives upstairs and only sneaks downstairs in the middle of the night when it knows the dog’s asleep.)

Question! Folks: I’m thinking about giving a talk in New York in August on the SMS project, the book, publishing experiments, historical walks, etc — would this be something you’d be interested in coming to? Reply to this email. Let me know.

And, to close out, just something random I found while reading an old David Samuels essay. Made me smile:

“And you can go out and run really hard in the dark and you actually don’t feel like you have a body. You feel like you’re just this head moving around. You’re just kind of out there, floating. It’s like this distilled transcendence.”

“In the Cascade mountains there is a scent in deep summer that elbows out all others - Snowbrush. Ceanothus velutinus. Crush it’s leaves in your palm in the dry air of August and it will fill your head with a potpourri, which these days has that singular ability to teleport me to a childhood spent (pre-internet) in the woods of Southern Oregon.”

“I am a 32 year old from San Diego. I only recently discovered self-reflection. It’s one of the most gutwrenching lessons I’ve had to learn. Clarity still eludes me, but I am quickly learning to listen to myself and trust my instincts on how to build a more meaningful life. “

“In a way, I was never torn from my shell because I carry it with me: I’m a snail, and though my snail-self has been uprooted countless times - in my childhood as an Army brat, my adulthood living across two continents and three countries, my current life in a nation that both is and is not my own - my protective shell has always been around me. The German word for snail shell is Schneckenhaus (snail house), and that’s where I’ve always resided, my only real home.”