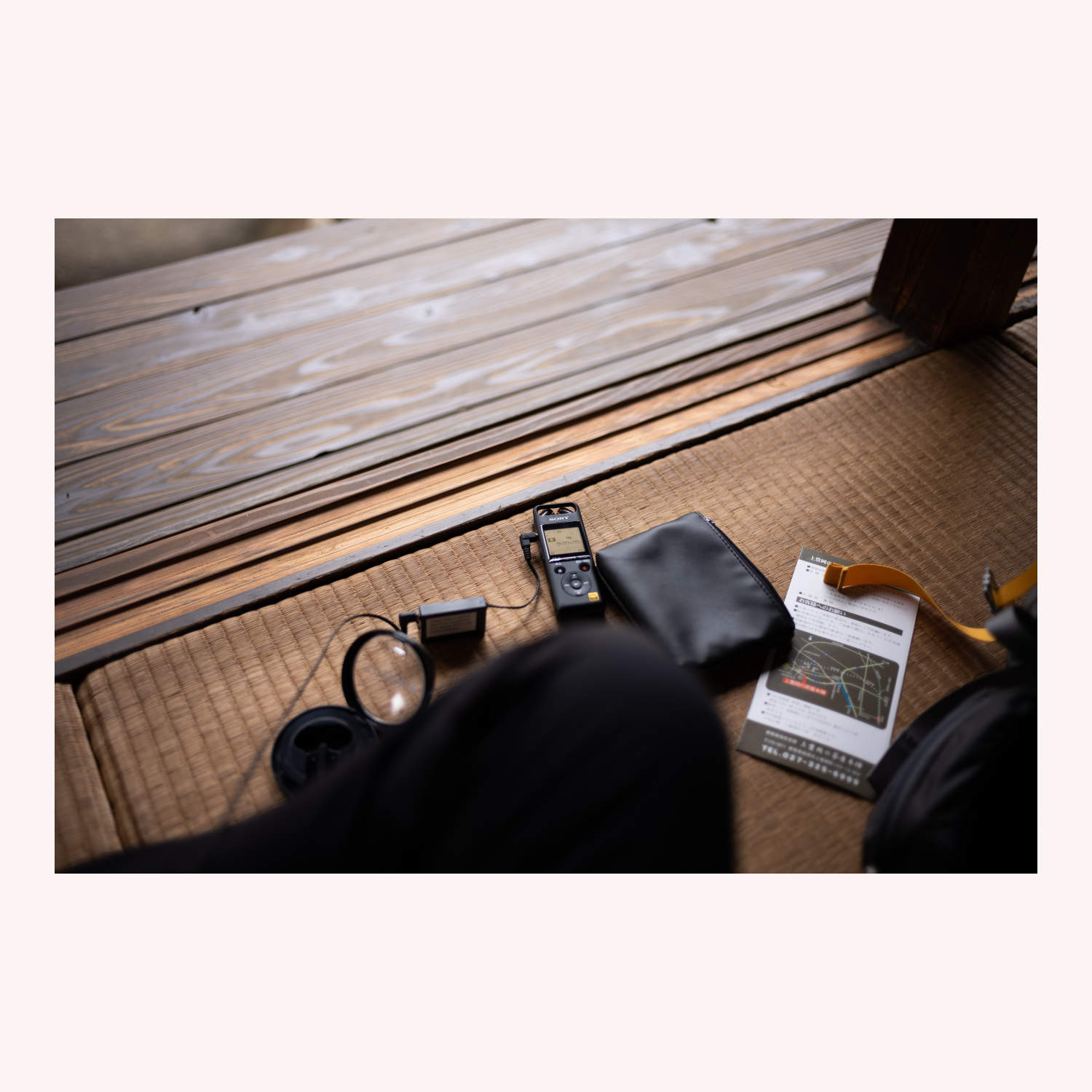 While walking this past spring I recorded two “seasons” of an ambient, binaural audio podcast called SW945.

You can find it at all the usual podcast haunts: Spotify, Apple Podcasts, Overcast, etc. Special thanks to Simplecast for hosting and sponsoring.

The premise of SW945 is simple: Fifteen minutes of audio recorded each day, around 9:45am, while on my long walks in Japan.

“Season One” covers my walk from Kamakura to Tokyo, Tokyo to Kyoto. “Season Two” is from Kyoto to Hongu, Shingu up to Ise Grand Shrine. I plan on recording seasons three and four later this year.

I had first played with the idea of recording-while-walking the previous spring, along the Kumano Kodo, as my feet bled in unseasonably hot weather. I recorded an episode of On Margins into my Bose noise canceling headphones while walking on a windy ridgeline. There was something simply … fun … about doing so. Alone in the woods. Talking to myself.

Then, along the Camino last September I recorded interviews with fellow walkers using a variety of different setups. Those recordings haven’t been made public although one or two might turn into a forthcoming On Margins episode. Still, recording on the trail felt like a vein worth continued mining.

And so when I set off on my honkin’ walk a few months ago, I had audio on the mind. But having done audio I also recognized the amount of effort that goes into production. It is exceedingly non-trivial. Audio post-processing can kill a healthy mammal. Requires so much work to be done correctly, to feel like it respects the listener. So the goal became not just to record, but to record as a daily practice in a way that was sustainable and of reasonably high-quality.

In the end I settled on the following configuration: A tiny Sony High-Def recorder, into which I plugged an OKM binaural microphone. The setup is ultra compact, light; perfect to throw in a pack and walk a thousand kilometers.

The binaural mics sit in your ears and capture sound as, essentially, virtual reality audio. If you listen to the recordings played back with good headphones on, you will be transported.

As one listener wrote in:

I just got off a long flight a few days ago and listened to the whole of SW945 without interruption, with my noise cancelling headphones on and a blanket over my head, as you do. It’s the perfect background soundtrack, sometimes dozing off a little, sometimes actively listening. At times it freaked me out a bit if there was some plane going above your heads in the recordings, hearing that on an actual plane feels very strange especially if you are totally immersed into the illusion of being in some village, birds chirping and all.

The process — searching, stopping, recording, standing still, listening eyes closed and wobbling — was eminently enjoyable. The daily recording was the surprise micro-joy of the walk. Fifteen minutes of stillness. Each day, I made a point to find — or attempt to find — a place or moment that embodied the stretch I walked. Here are some of my favorites:

Day one ended up being one of the best, or at least most harmonious recordings. An auspicious start. Daibutsu hiking course, standing in front of a little chicken coop. Birds and planes up above, trains in the distance. 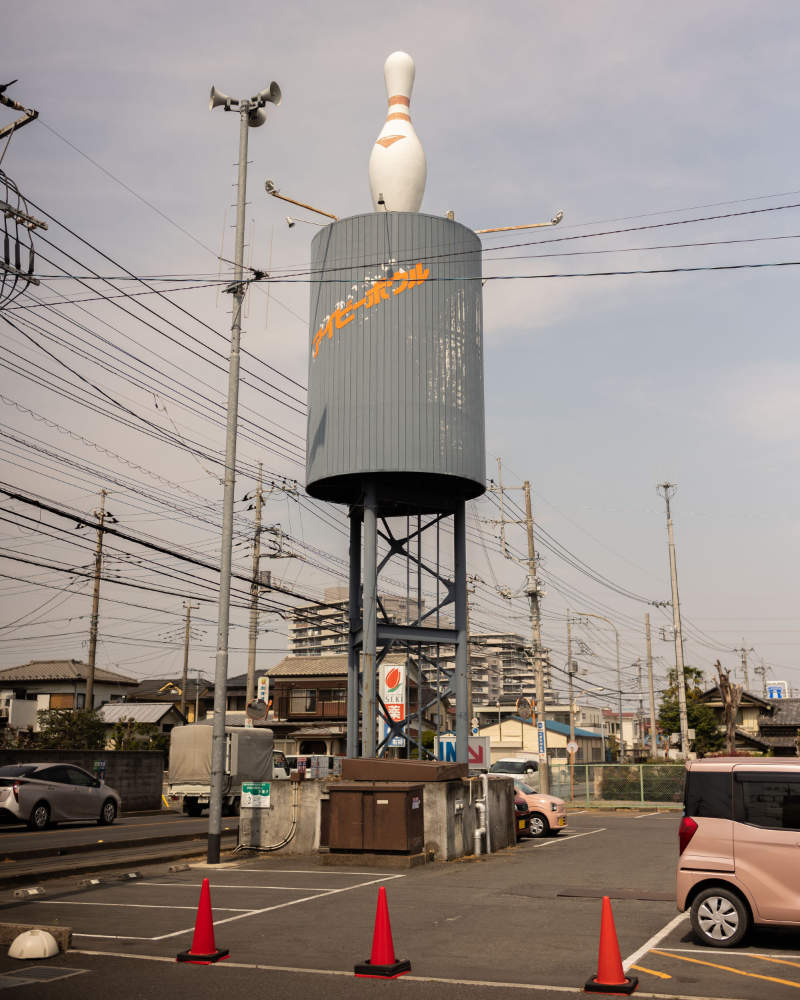 Day five and Day seven are probably the most dissonant of all the days. Recorded in a pachinko parlor and a bowling alley. Staples of this stretch of the road.

I wrote about recording the pachinko episode in Ridgeline 28:

The recording microphones I used look like headphones. I put them in my ears, started recording, and then just walked in. The parlor was in rural Saitama. I was most certainly the only person who hadn’t driven there. There were some white pleather sofas at the front of the warehouse (because it was more warehouse than shop or parlor, vast, like it had been stocked with dog food until just yesterday) and I sort of slithered from the entrance to the sofas. Sat motionless with my giant pack. I probably looked more terroristic than anything. Single white male walks into a pachinko parlor with a giant backpack full of who knows what, etcetera etcetera. Terrifying, no? But this being Japan, I was left alone. Amazing considering I most definitely did not blend in with the chain smoking old men surrounding me, some sleeping, most watching the TV blaring morning shows on the wall in front of us. Fifteen minutes later I completed my improv performance art piece as foreign statue (self-experienced as a spat of vipassana), stood, and with great existential relief, walked back into the fresh air and sunlight. 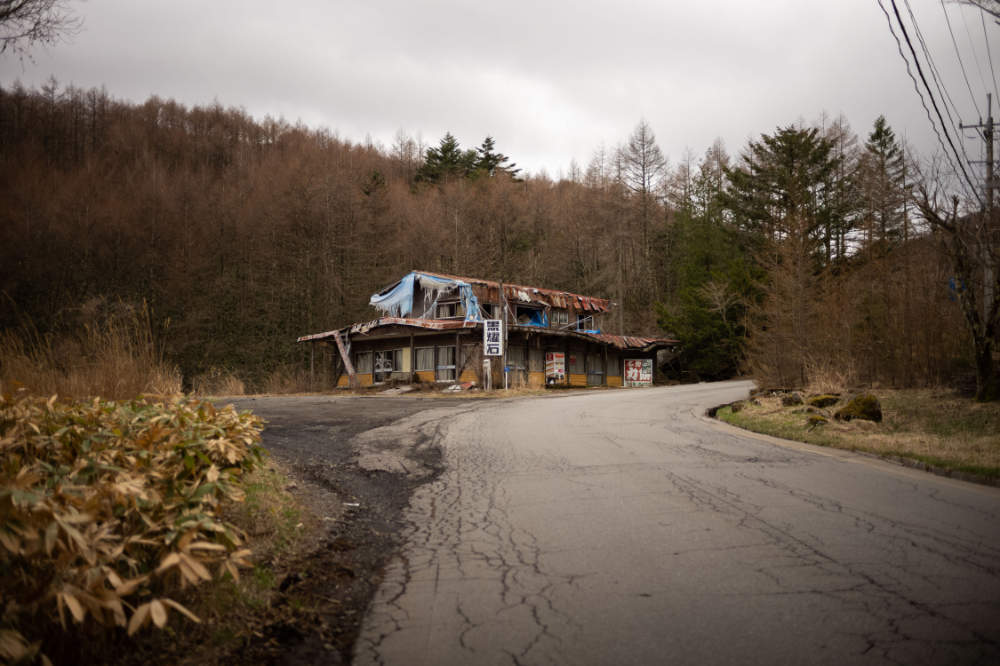 Day 11 is the only “narrative” episode, in which I explain how a man appeared from a solitary home at the top of a mountain pass to hand me … frozen bacon. 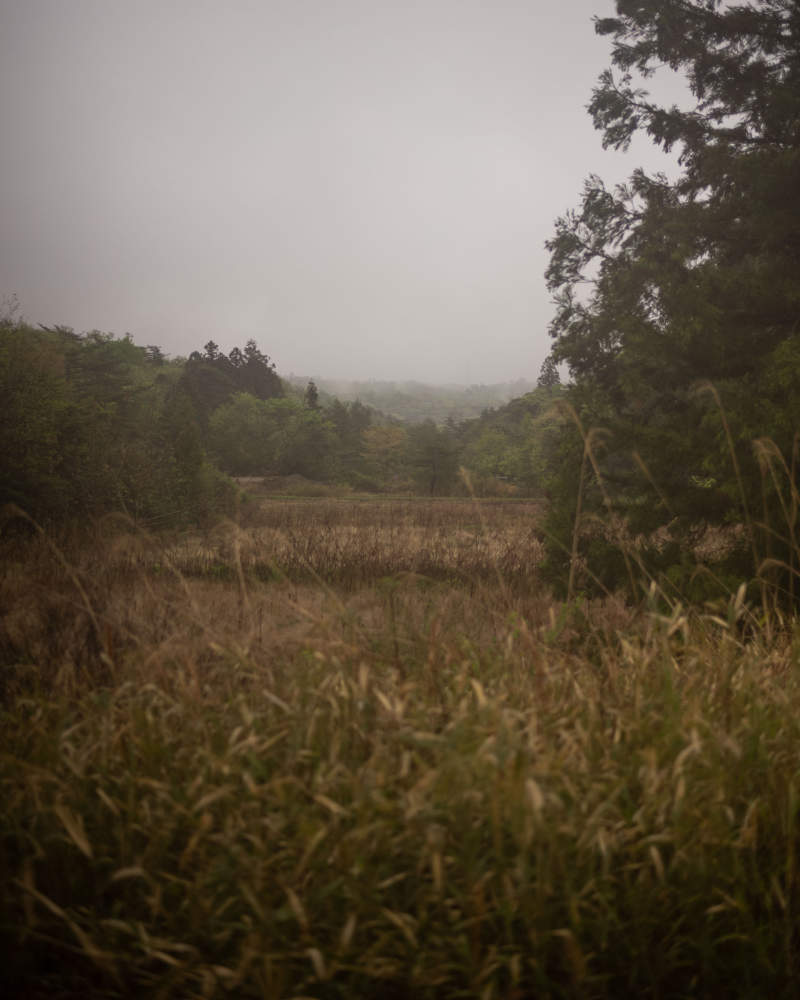 Day 17, “Frogs in Rice Paddies” I remember well. Standing alongside a little country lane, next to a trio of fields, the frogs croaking, a drizzle pattering on my umbrella held overhead. Some small kei-sized farm trucks driving by on the road directly behind me. Farmers peeking out of their houses at the weirdo doing his best statue impression in the rain.

Day 19 is a recording of movement — from my hotel room to Gifu Station. Elevators, children running, station sounds. And then Day 24 was fifteen minutes of my own stillness punctuated by the unmistakable whoooosh of the shinkansen.

In Season Two you could hear a monk talking to himself in the background at Omine Sanji Shrine, and the wild rains and winds as I camped at Tamaki Shrine. 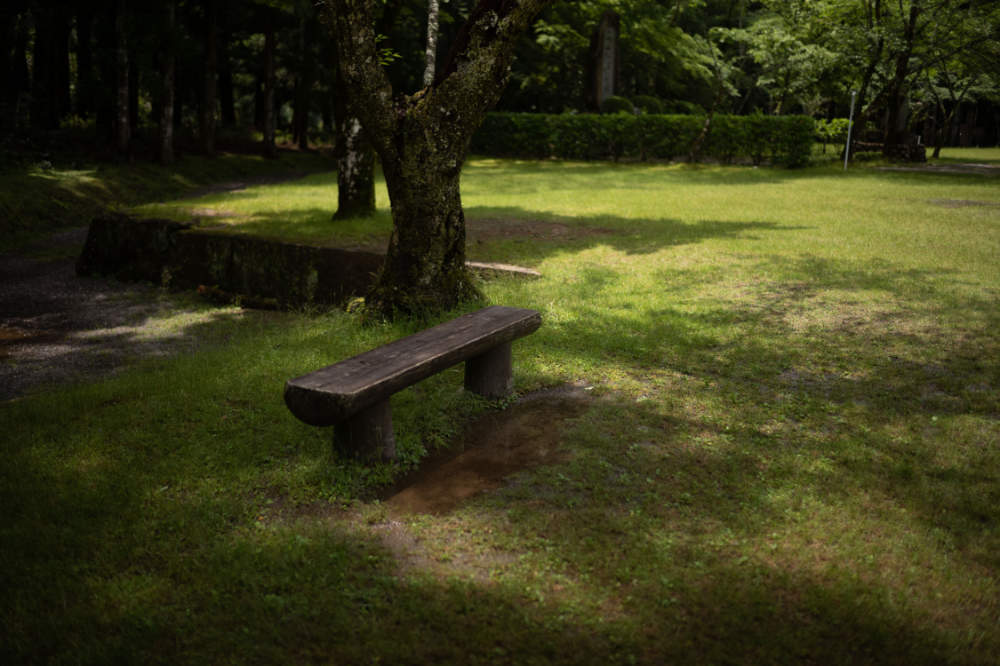 In Episode 6 I sat on this bench in the middle of Oyunohara listening to the crows. (None with three legs that I saw.)

For Episode 8 I sat in front of a spring that was turned into a tiny place of prayer. It is said that Kobo Daishi stepped there, and from his footprint a spring sprang forth. It was up a little climb, tucked into a mountain off the main road, almost nothing in the way of signage.

The final recording I made before heading back towards Tokyo by train (it had gotten too hot, I was drinking four liters of water a day, the plan to walk back was aborted), was on the grounds of Ise Grand Shrine as I stood beside the Takanomiya sub-shrine. Groups small and large arrive, clap, pray. My arms are devoured by mosquitoes.

My plan is to continue SW945 later this year. Mapping walks out at the moment, more details to come. Thank you all for listening.

“I was born in Canada, and though I was only there for a couple years I’ve always preferred cold to hot. That makes my move south, from California to Utah to Texas, all the more strange. California, Utah, Texas: A path through America which suggests a certain political persuasion. But quite the opposite is true, thanks not to any particular dogma I was raised with, but two gifts from my parents: A recognition of how lucky I am and a love of learning.”

“In 1980 I graduated from a rehab program. (Tough course!) Since that time I have been searching for the silence between thoughts. Walking helps.”

“Manila born-and-bred, where nobody walked voluntarily. Too hot, too wet, too dangerous, too difficult. Unreliable sidewalks. Then short stints in Hong Kong (where I discovered the joy of walking along the Dragon’s Back) and Rome (where I walked for days in badly made but pretty shoes across cobblestones, oblivious to my bleeding soles because I was so happy to be there). Now based in Singapore where people don’t walk much either – too hot, too humid. In the last year, I have seen the city’s smaller details through almost-daily walks, and return home to find that a problem has invariably been solved in my head. “