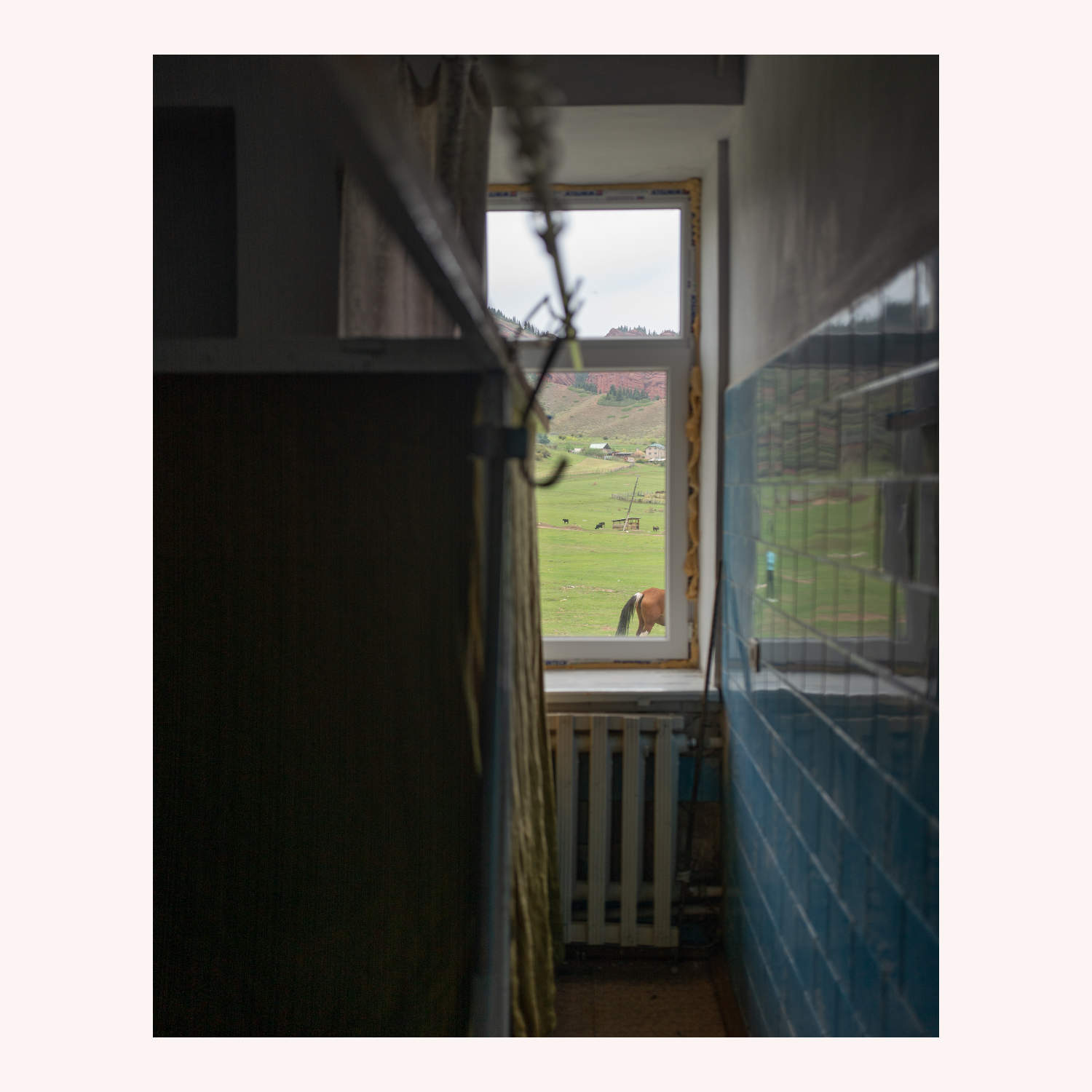 Hello from a valley in Kyrgyzstan. The cell signal is out. The wifi never-existent. Mountain foal roaming about, some with their two front hooves hobbled by leather straps, some allowed to run freely. The elevation a breezy 2,500 meters at the valley floor. Above, a new moon. Stars all dome-y and whoa from cliff to treetop. And down at the far end of it all, like vanilla ice cream dessert, a glacier just begging to be hiked.

If you get this message then it means the hulking, green, elegantly blunt soviet-era machine that got us to this remote valley didn’t flip over on a wooden bridge or fail us while fording some river on the way out, back to the world of connectivity.

Earlier today: An extremely strong and ancient and (seemingly) wise woman at a sanatorium instructed me passionately in Kyrgyz or Russian to do this or that while giving me a massage that I can describe only as: vigorous and frictive. And so here is a Ridgeline, from somewhere between that old sanatorium and a glacier. It is as odd as the place I am in right now.

I recently explained (once prodded) to a surgeon sat next to me on a plane that I had been doing a lot of walking and walking had come to typify the rhythm and schedule of my life. He looked at me with suspicion. Walking? I knew what he was thinking: You’re doing it wrong — Life. I knew this because he had already issued unsolicited condemnations of the lives of others (those famous, successful!) and had told me in broad strokes his various formulae for Life Richness. A regimen of extended walking did not fit the bill.

I found his sureness of life philosophies and his presumed understanding of the lives of others appalling and entrancing. He didn’t mean his judgements maliciously — they were simply facts by which the world worked in his mind. And I think he meant his judgements instructively. These were lessons. It was paternal, if a bit wacky, and probably far too deep a discussion for a flight at six in the morning.

But the whole episode made me think of fathers, and my father specifically because — and I say this without hyperbole — my father taught me not one single thing. At least nothing in the tangible, actionable, life lesson bucket of knowledge. Certainly nothing in the judgy all-knowing realm of knowledge. My parents divorced soon after adopting me, and so in part it was because I only saw him once a week. And yet! It seems impossible but I’ve tried to dredge up anything — anything! — he may have taught me: how to catch a ball, tie a rope, find an edible mushroom, talk to a girl, answer a phone, take a complement, wire a light socket, make an omelet, sew a shirt, write a sentence, a poem, read a book critically, hardily shake a hand, order a non-fast food meal, properly tip, tie a tie, listen to a record, chop a tree, mow a lawn. Nada. He just didn’t have it in him. He himself came from a desert of knowledge and the best he could do was try to keep himself together — try to keep his wobbly ship with broken masts and a single oar moving forward — never mind instruct a tiny human in the ways of a world that was — I now know — wholly and obviously mysterious even to himself.

But there was this: He used to take me horse betting. We’d go to the track and he’d holler his head off. His hearing had been damaged his entire life, so hollering was his baseline. He’d holler and we’d bet. I must have been eight or nine. We never won. But one afternoon, after hollering for hours, screaming for Lucky Lucy or Sunday Silence or Wind Splitter, banging on his seat, the woman behind us tapped him on the shoulder and said: “I just wanted to say, it has been such a pleasure watching you have so much fun today. Thank you.”

That’s it. That single moment of an entire childhood. Own your horse race. Own the smallness of that world. Was it a good way to spend an afternoon? No. But no one could say he wasn’t there, wasn’t present.

The walk is obviously far more than just a walk. A walk is a framework, a platform for thinking, for experimenting. A walk well executed connects people and geographies, histories, literature. Bridges a defunct Soviet era to a much larger autochthonous and mythopoeic landscape, stallions and glaciers and Kyrgyz language and all. But it is also “just” a walk. A small thing. Something a surgeon may eye suspiciously. One foot in front of the other. Rooting for a dumb horse in a pointless race, making the most of an afternoon, a life, with the simple tools you have.

“For years I identified myself as someone who hated my longest-standing extracurricular activity (being forced to take piano lessons and compete for well over a decade), but now I am trying to rebuild a life of positivity and hope to balance out my misanthropic beginnings.”

“In a way, I was never torn from my shell because I carry it with me: I’m a snail, and though my snail-self has been uprooted countless times - in my childhood as an Army brat, my adulthood living across two continents and three countries, my current life in a nation that both is and is not my own - my protective shell has always been around me. The German word for snail shell is Schneckenhaus (snail house), and that’s where I’ve always resided, my only real home.”

“Manila born-and-bred, where nobody walked voluntarily. Too hot, too wet, too dangerous, too difficult. Unreliable sidewalks. Then short stints in Hong Kong (where I discovered the joy of walking along the Dragon’s Back) and Rome (where I walked for days in badly made but pretty shoes across cobblestones, oblivious to my bleeding soles because I was so happy to be there). Now based in Singapore where people don’t walk much either – too hot, too humid. In the last year, I have seen the city’s smaller details through almost-daily walks, and return home to find that a problem has invariably been solved in my head. “

036
Postcards from the Baikonur Cosmodrome