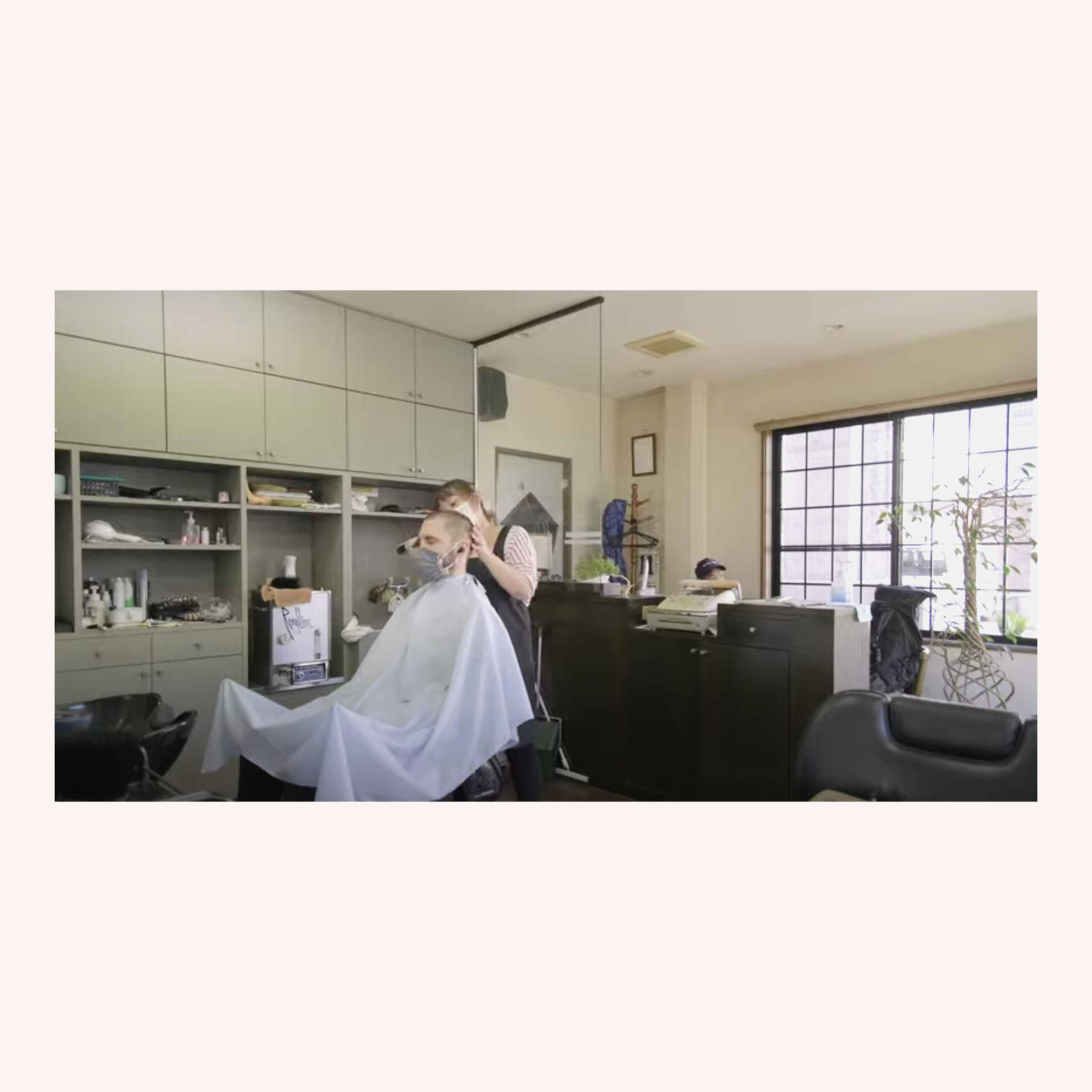 I first buzzed my head towards the end of my Nakasendō walk in 2019. I had just gotten to Kyoto by way of some many hundreds of thousands of steps and the accomplishment felt non-trivial. Like I had passed between some pre- and post-walker barrier and a commemorative event was in order.

So I booked a cut at a “fancy” “old timey” barber in Kyoto and went in and asked for a buzz.

I honestly don’t know if I had ever buzzed my head before. I have a vague memory of a summer in my childhood where my best friend and I got buzzed and it felt like we were brothers, and that feeling felt real and exciting and I remember wanting it to be true — the brothers part — with all my heart. But I can’t tell if I invented that memory, or if it actually happened.

And so in Kyoto, in the chair, some thirty years after this real or imagined summer, a new summer was on the horizon and I was being asked how many millimeters I wanted. I had no idea. Three? Three it was.

For most of my life, to a fault, I gave a shit about my haircuts. At some point in elementary school gel entered the equation and I didn’t look back for a solid decade. Then the hair grew out and I man-bunned way before it was the hairdo de rigueur amongst fops of artistic leisure. And then I chopped it shorter. But all the while, energy and effort were involved. My hair is dead-straight, wispy, would make for an expensive paint brush. So without product I end up looking like a Polish farmer; no Roman curls to save the day.

I don’t know why the idea of buzzing didn’t enter the scene earlier. In hindsight, it’s obvious. The buzz. Of course. I suppose I had to make my way there via some convoluted route of waxes and fancy stylists.

As soon as the buzzing began in Kyoto I knew I had found something good. A weird balance of ascetic aesthetic and a shedding of a useless vanity I had hauled up onto my back up in another life. We carry the dumbest things around with us.

The buzz ended and I was light, my childhood forehead scar was interestingly visible, and rubbing my noggin was heavenly.

A few days later I walked a mountain ascetic route for a week, carrying 20 kilos of food and water and camping and the buzz felt better yet.

You’d think that buzz maintenance would be easy, but a self-buzz is a trying thing. I self-buzzed today, so it’s top of mind; a decent job takes a good thirty minutes or so. Maybe longer. And you almost always need to do a little cleanup the next day. You’d think it would be quick, a few swipes of an electric trimmer. But the head — even a relatively smoothly-shaped one — is wacky inconsistent, and a truly well-buzzed buzz requires passes from every little angle.

The buzz is done mainly by sound — you hear the tenths of a millimeter of hair sticking up and passing through the shimmying blades. You keep passing and passing until the sound is even, and thereby know, too, that the length is even.

Out in the wild, I was lucky with that Kyoto shop — they were good. But, man, have I had some fools buzz my head.

One moron wouldn’t shut up about how much McDonald’s he ate — I eat it ever day, brother! What about you? And he told me how much he smoked — so much, packs and packs. He was about 43 but looked 60 and his father owned the barber shop. Poor, kind, bastard. Every time the elderly man tried to ask me a question his son would swat him away. Look at your neck! It’s so manly! Not only was it the most insane stream of consciousness I’ve ever had poured into my brain in a barber chair, but it was bar none the least competent buzz of my life. So bad I couldn’t tell if he was serious when he yelled, Come back soon!

I was buzzed by a woman on the most recent Tōkaidō walk and just out of frame of the camera lies a shocking calamity of black mold taking over the floor. I didn’t notice until I sat down, and by then it was too late. She was pretty good at the buzzing but I wonder what skin diseases may have been transferred by her clippers. (Not the one in the photo above; she was wonderful, her third-generation shop squeaky clean.)

Speaking of which, a guy along the Ise-ji grabbed his clippers to start the job and inches before my skull knocked free about five years worth of old clippings. I’m surprised the things weren’t rusted shut.

On the good side of the buzz:

A job in Williamsberg was quick and solid, the guy built like a so-called brick shithouse, amiably chatting, folks behind swapping Pabst Blue Ribbons and swooning over new tats.

And my main buzzer, the guy I’ve been back to more than anyone else, is something of a bodhisattva buzzer. Looks like a surfer, late 30s, purposefully fried, dyed-brown hair, working with his mom in a barber shop build 40 years ago and not touched since. Each time I enter he nearly falls over in surprise. Then I sit, and he places the bib upon my body with such strange delicacy, such care, as if I were a spider web he was trying to wrap up in a napkin without breaking a strand.

And then he issues a strange giggle as he asks the length. Same as last time, I always say, and he says, ha ha ha you got it and off he goes. Not another word. Silent, slow, meticulous. We enter dualistic buzz meditation, I close my eyes, the world disappears, nobody talks in this barber shop — imagine whatever happens in a West Philly shop and invert it. That’s this one. The radio on in some back room is the only noise. And the clippers. Buzzzzzzzzzz. Then he has me fold forward into the rinse bucket, his fingers like those of a frog, or the pads on the paws of a dog, that’s what the quick rinse feels like — being rinsed by a kindly and nimble dog.

Then unfold, followed by the most careful blow-dry you ever did have. Yes, madame, blow-dry of a buzz. The dryer set on the lowest setting, held a meter away from the head, the slightest hint of moving air, a careful tousling of five-millimeter long hairs — touching my head as if I were a sleeping gerbil. And then those dog paws back on the top of the skull, the sides, doing that massage thing Japanese barbers do. All in a kind of slow motion.

The whole procedure takes forty minutes or so. It’s ridiculous. Even when folks are waiting, it’s the same length, no rushing. Nothing in the universe but the buzz.

So you’d think a buzz would be a buzz would be a buzz, but, boy, is the gamut large, the competency levels all over the map. If you’ve never buzzed, I recommend a buzz. Male, female, whatever. It works in mysterious ways, a good buzz, a great buzz elevates the soul. Just remember, if you do it at home, it can be tiring on the arms.

I started walking a few months ago after my wife passed away as a way to get some solitude, process my grief, and get some literal momentum in my life. As this was in the midst of a Covid-19 lockdown here in Singapore, walking was also a way for me to get some much needed fresh air and exercise. Just one foot in front of the other, the walks were great for clearing my head but soon I found that they have become more than just a way to decompress but in fact enjoyable. My walks have since became longer and I am starting to actually notice my surroundings instead of just covering the distance.

Being in a fully urbanised city-state, my walks are along concrete pavements and the park connector network that we have along our system of canals and drains. These are urban walks that often cut through our public housing estates, occasionally along busy roads, and sometimes urban parks.

A Late Night Walk in a Small Southern Town