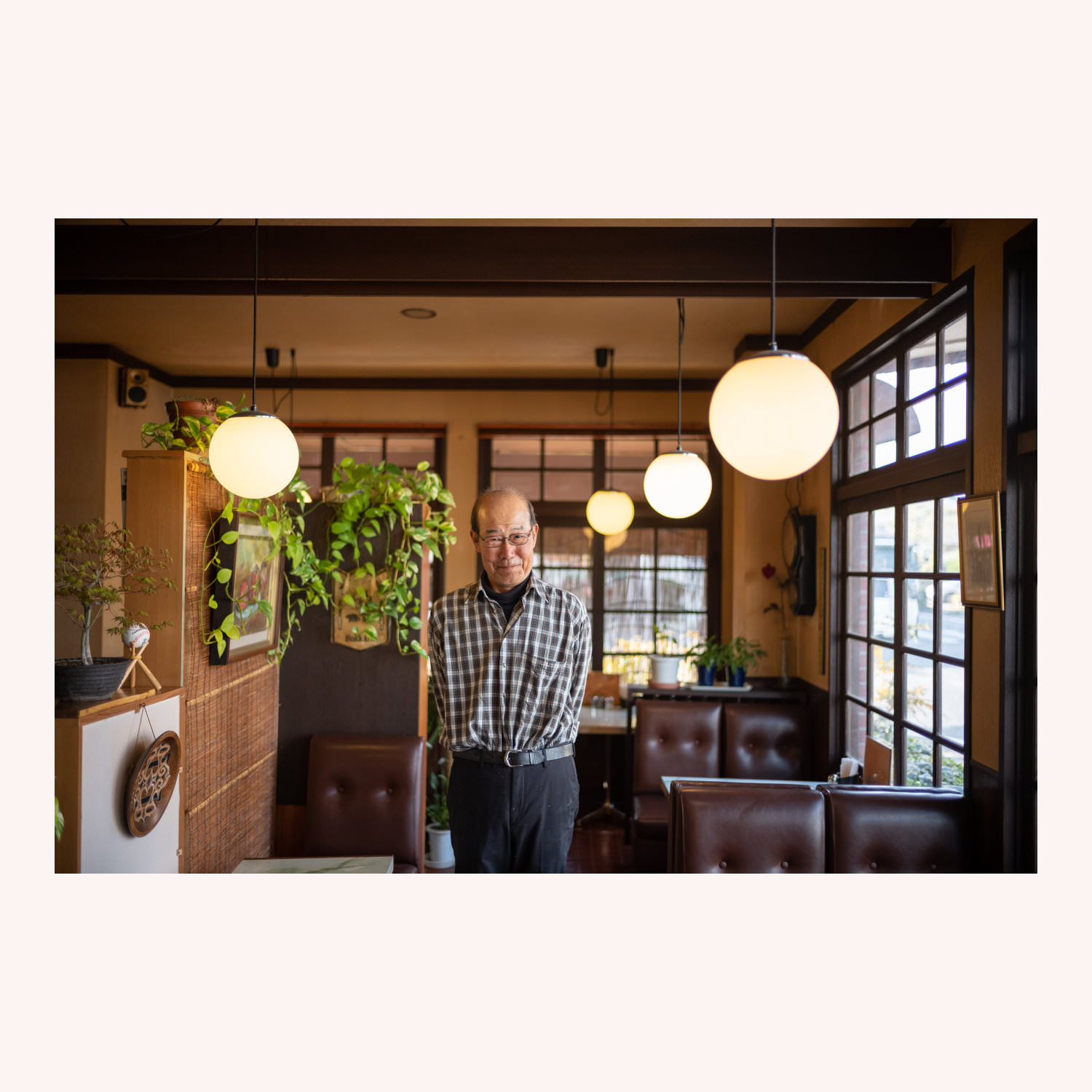 Last week, an extended ode I had been working on for the last six months was published by Eater: My Epic Quest for Pizza Toast. The piece began with a pizza toast obsession and grew into a Showa obsession, a kissa obsession, a community hub and aging population and “shuttered town” obsession. It’s yet another lens on that big walk I did in May.

I wrote oodles more than was published, and I’d like to share some of the additional vignettes, notes, et cetera, here, in Ridgeline. Why not, right?

Here’s a moment from Cafe Thompson. I had just eaten some fine pizza toast an hour or two before and couldn’t bring myself to order more so soon (how spoiled I was for pizza toast in those first few days!). So instead I had a coffee, and a little chat.

As if invoked through dream, there it was, Cafe Thompson. The day had been long, one of my longest and still early in the entirety of the walk, and I had thought just moments before: A coffee break would be good.

Thompson was empty. It was mid-afternoon. The owner had a sly smile. I sensed that he didn’t know what to make of me but even so, didn’t ask the usual questions: Where was I from? How long had I been in Japan? He simply took my order: American-style black coffee.

Kissa usually have two kinds of coffee: “blend” and “American.” Blend is standard coffee. Often roasted darkly for milk and sugar, it can be a bit on the nose as I like my coffee black. American coffee is the watered down version of the blend. Inspired, so it is said, by the thin coffee American GIs drank.

The design sense of Cafe Thompson was refined. Formica tables with wooden trim, mid-century modern pendant globes hanging from the ceiling, the ceiling itself with handsome square-cut wooden crossbeams, broad windows sliced into repeating square frames along the main supporting wall, a wall that looked out onto the comings and goings of the old Nakasendō road, all tied together with tufted-leather sofas, paired at the larger tables, and set singly at the smaller ones.

The owner with the sly smile served my coffee. It was good. “American” can be a gamble — sometimes watered down to nothingness, undrinkable. But this was just right, what I had hoped for. I took another sip. He stood beside the table. I sensed he had secrets if you knew which questions to ask. So I asked the only sensible one: Why “Thompson?”

The sly smile grew slyer still. He said he liked the sound. Isn’t it nice? TOE-MU-SAN. Three punchy little syllables, soft in the center, pronounced in a Japanese staccato. Ta-ta-ta. He told me he opened the shop in his twenties after studying cafe work at the Jugetsudo Tea Shop in Ginza. Came back up here, to Gunma Prefecture, took over his great uncle’s old tabi shop. A shop that sold socks. The building a hundred years old. Converted it into the cafe I saw before my very eyes.

But Thompson? Who knew a smile could be so sly and stay on a face. Yes, he said. Thompson, because the vanity of putting his name on the shop was too much. So, instead, Thompson. Which, he implored, sounded just like his own name: Kazuo. Didn’t I think?

“I’m a 49 year old “renegade community builder” in Minneapolis, Minnesota. I’m currently walking on a treadmill desk as I write this. Having a dog when I was young helped me survive some early hard things so walking a dog each day is part of my healing journey. I appreciate the invitation to share who I am.“

“Born in Britain, resident of Japan since 1990. I walked as a child on family holidays in the Lake District; cycled through fifteen countries in my early twenties, and now enjoy regular morning walks through the local park watching the seasons turn. Walking fixed my back problems.”

“i am the only one in the family with 4 sisters, that walk a different kind of path which as years goes by, leading a little far from family. For the love of sketching, i walk. I make a drawing on postcard in 2017 about this road. As years goes by, this road will change too . I can only sketch it. When ever i walk i often felt a sense of nostalgic.