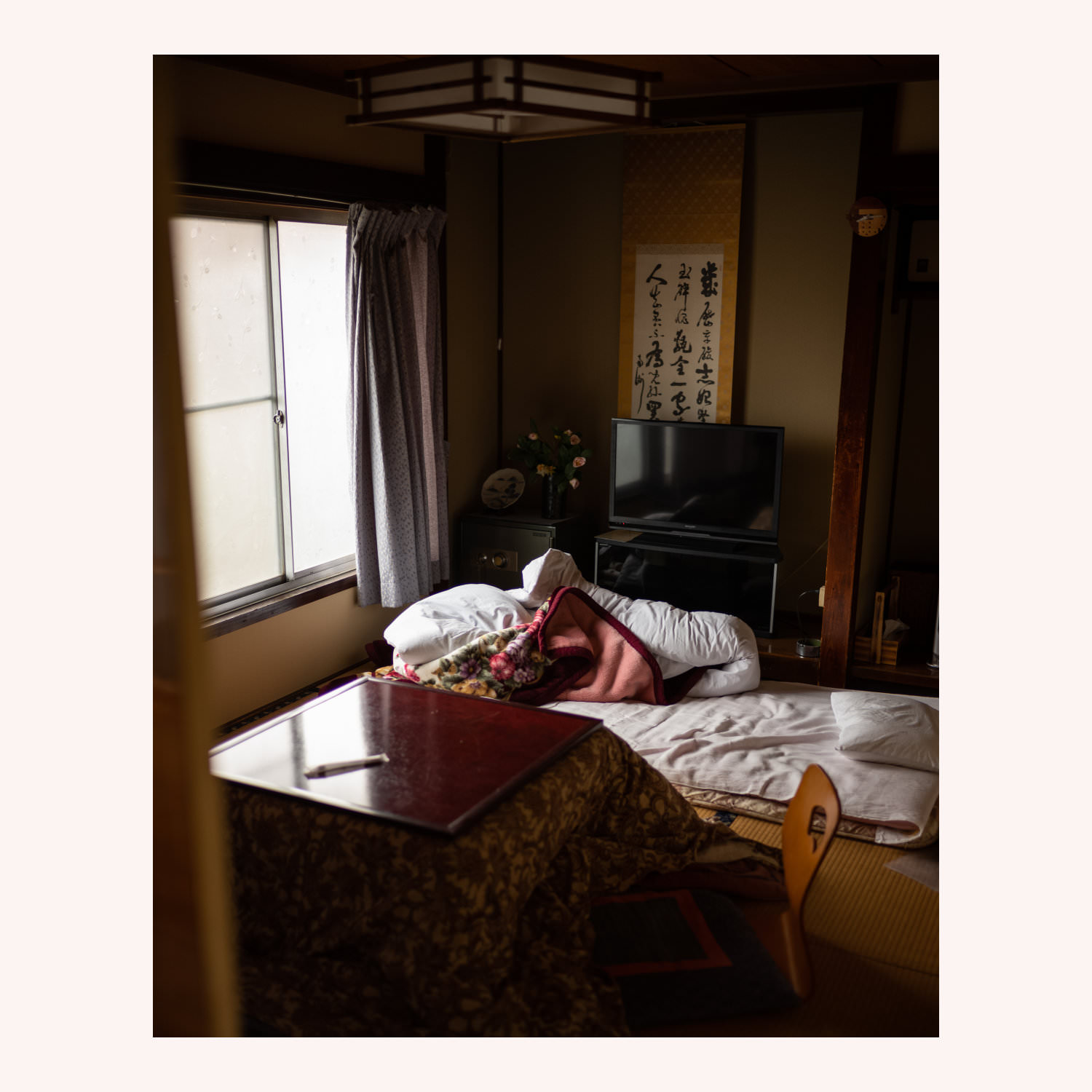 The longest walk of my recent long walk was a 47km day. I hadn’t intended it to be that long, but I had underestimated most of the days, and knew this day was going to be long, just not as long as it had turned out.

In memory this single day feels like many days. But it is also this bed — in the back of a family-run inn, the strong mother meeting me at the entrance, ready to give me shit. I was thirty minutes late. I apologized. She was no pushover. I made dumb faces and hobbled and spoke at length to the great feat I had just completed — 47km! The asphalt!, the overloaded pack!. My feet were burning. She was having none of it, though I sensed the slightest smile crack. I was tardy and a dummy, but also perhaps redeemable.

Already in the doghouse, I pushed dinner back further. I was the only one staying that night. The bath was already full and steaming. I needed a bath, to shed my clothes and destinkify before food. My feet were taped up. The tape came off in ghoulish chunks. The bath was perfect — a little iron kettle for a human body to fold into. Five minutes. That’s all you need when it’s hot. What is this hours and hours of bath nonsense. I changed into sweatpants and felt human and surprisingly spritely.

The many courses of food were served by the daughter. She had returned from her day job at a television studio. There is always a TV in the dining room of these places. I turned it off. I was alone. They turned it back on — no, off is fine. I hoped because of her profession she didn’t take offense. I read a book. Almost nothing stirred outside. Sometimes a car whooshed by. The mother and daughter came in and we talked about the boneheadedness of my day and how it was far too long but, also, about how there was nowhere else to stay along this stretch. No early stop, unless I hopped on a train or bus and broke my walking-only rule. The road wasn’t used by walkers anymore; I was bending it in ways it didn’t want to bend.

The bed was heavenly, I assume. I remember little of the night. Only that I disappeared into a monastic darkness as soon as I finished editing and publishing my daily SMS and SW945 recording. A recording in which, deflated and spent, I sat in the entrance to a random historical building and pressed record. I didn’t have the energy to hunt out anything else. I still had about 35km left in the day.

That was the thing: I had established a schedule that was just on the edge of my physical abilities. I hit the end of each day at zero, and so sleep became something I raced towards, only because I knew how much recovery was needed to do the same thing once again the next day. Sleep was life. I leaned on it every single night. I had also committed to the publishing. These two things — the physical rigor of the day and the daily rigor of publishing were the fuel for a kind of joyful asceticism over the six walking weeks.

Right now I’m sitting in a small inn in Yoshino, Japan. A workshop I’m co-hosting begins tomorrow. 15 people arrive from around the world. I am excited but also weary — I know how much energy this will take. Yesterday and today have been 12 hours days of prep, a million moving parts. But a week has passed since the last Ridgeline newsletter. I’ve committed to this newsletter, though sometimes it arrives a day or two late. A year ago I don’t think I believed I could have done this — the prep and the writing. But the walk taught me of reserves and resilience. That even late at night, after running through my opening talk a few times, despite how desperately I want to roll over and say goodnight, that you just do the work. You sit down, and write, and publish.

That’s what I’m doing. I’m sitting down and writing and publishing. I’m thinking of the bed, pictured above, at the end of my 47km day, and how I got up and walked another 30km or so the next day. But I’m also thinking about how that evening after dinner I ran to that place of sleep with a rigor that was as serious and stone faced as the mom was when she greeted me at the inn. And so now too: Next to me is a futon. Hoping for a quick trip back to that monastic darkness.

Post-47km futon in the tiny tatami room: A

“Brought up in a small, surprisingly hilly town in the Antipodes, walking was how I got anywhere. Barefoot often, but not in summer when the sun melted the asphalt. Gumboots in winter for rapid disrobing. Walking became my default mode of locomotion, meditation, introspection, rumination. I have walked all over the world, but now required by personal circumstance to be largely static, I spend my spare time reading the accounts of people who have walked places I would rather be.”

“Only recently, I learned that I haven’t torn myself fully from my shell. Since childhood I’ve been drawn to the tension between systems of thought and my god-given atheism, moment in a novel, painting, or song when I can’t believe the artist just went and did it, and a desperate need for others' approval. I’m bringing the first two with me as I walk and define exactly what I want for the 60% of road ahead. "