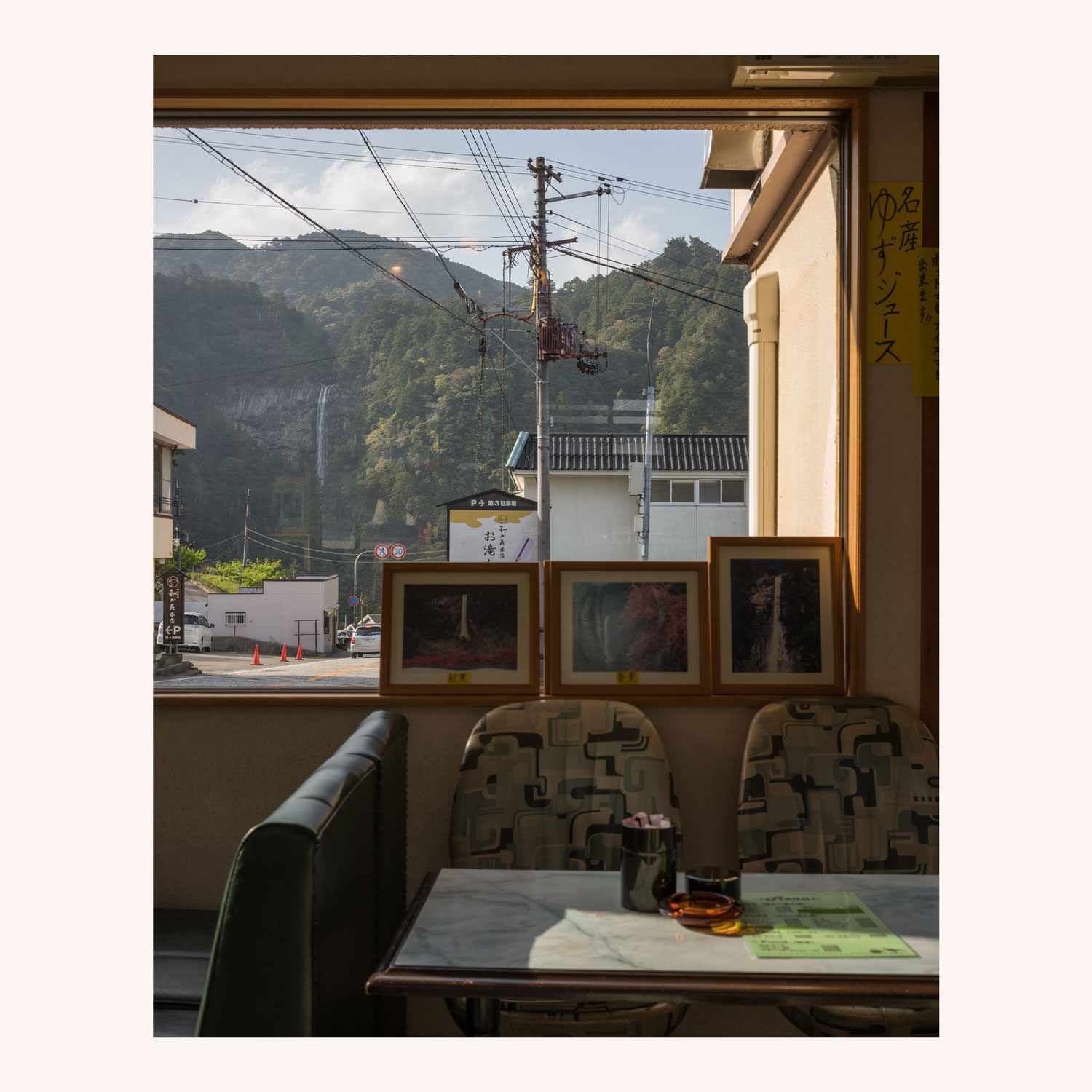 The Cafe With a View of the Waterfall

At the end of the Kohechi walk on the Kumano Kodo, there is a tiny cafe set in its own tiny building in the still yet tiny village surrounding Nachi Falls — the largest single-drop waterfall in all of Japan.

The fourteen kilometer walk to Nachi, usually from Koguchi — an even smaller village with little more than a school converted into an inn, run by the nicest of old men with the voice of a radio announcer — over the Ogumotori Pass isn’t particularly long, but it can be exhausting. The day starts with the infamous Dogiri-zaka, or “body cutting slope” and its 800 meters of climbing. which, honestly, sounds worse than it is.

And so you arrive in Nachi tired, ready for some iced cream, or maybe a coffee. There are a few cafes in this village dedicated to the falls, but the one we’re concerned with is called “The Light Food and Tea Room With a View of the Waterfall.” (「滝の見える軽食・喫茶」)

I went in, empty. No owner, no customers. I waited. Yelled Hello towards the back. Nothing. Began to poke around. Photos covering the wall of someone — the owner? — with various … minivans? Over the years? So many? Why would a man need this many minivans? And the pride! Why the pride of the poses? So much pride gushing next to minivans? And then looking more carefully: Were these all the same van? The owner and his van? No … different vans, same model? Subtly different models? No other landmarks in the images? Filling the frame? Did he criss-cross the country, ask strangers to photograph him? Instructing, Crop ‘em close!?

And then nearby the vans, slightly suggestive — or, at least suggestive in that Lolita-like way that can be so common in Japan — photos of … his daughter?

The questions did not end: Why does the sink have a box of tissues in it? And a newspaper? But also soap, that looks recently used? Is this a Tupperware container filled with … spaghetti? And then more closely: cooked spaghetti?

No, Borges did not own the cafe. The owner, looking like an extra in an 80s yakuza film, head a bundle of thick punch perm curls, ran into the shop screaming in strained English — POLICE COMING! POLICE COMING! CLOSED!

Who were they coming for? Had he called them on me?

No time to think, I bolted from the shop.

Seconds later he was behind me screaming once again: TABLET! I had left my Kindle on the table. He handed it over, bowed, and then hopped in his minivan and was gone.

“I guess I am torn from a small town in Arkansas, that I left in search of a bigger life but only found cheap whisky and poor decisions, and now find myself back, realizing that I was a small town kid all along."

“I was born in Bihar, a state in North India where one third of the population lives below poverty line. I grew up listening stories about my neighbours looting buses and hanging out with their children who sometimes brought father’s firearms in the field — for just in case situations. I was later admitted to a boarding school at the age of 12. It was a boys only school and was run by Ministry of Defence. “

“From a village in Dalmatia of about 800 people, where I still get offered a ride (in cars, sometimes tractors), which I politely explain I am walking to point B, for ‘no purpose’ but to turn around and walk back to A. Where my farmer uncle says it would be better if I took a herd of goats along with me. Roman aqueduct remnants. A medieval crusader castle. An ottoman hotel. 100,000 migratory birds on its lake. Seasonal walking club membership count maximum is at 003.”

“I was born in Detroit to a crazy, single mother and pretty rough surroundings. Like the film 8 Mile, only more rapping.”

(“Fellow Walkers” are short bios of the other folks subscribed to this newsletter. I asked for bios in Ridgeline 001 — “What shell were you torn from?” — and got hundreds of responses. We’re working our way through them over the year. You’re an amazing, diverse crew. Grateful to be walking with you all. Feel free to send one in if you haven’t already.)