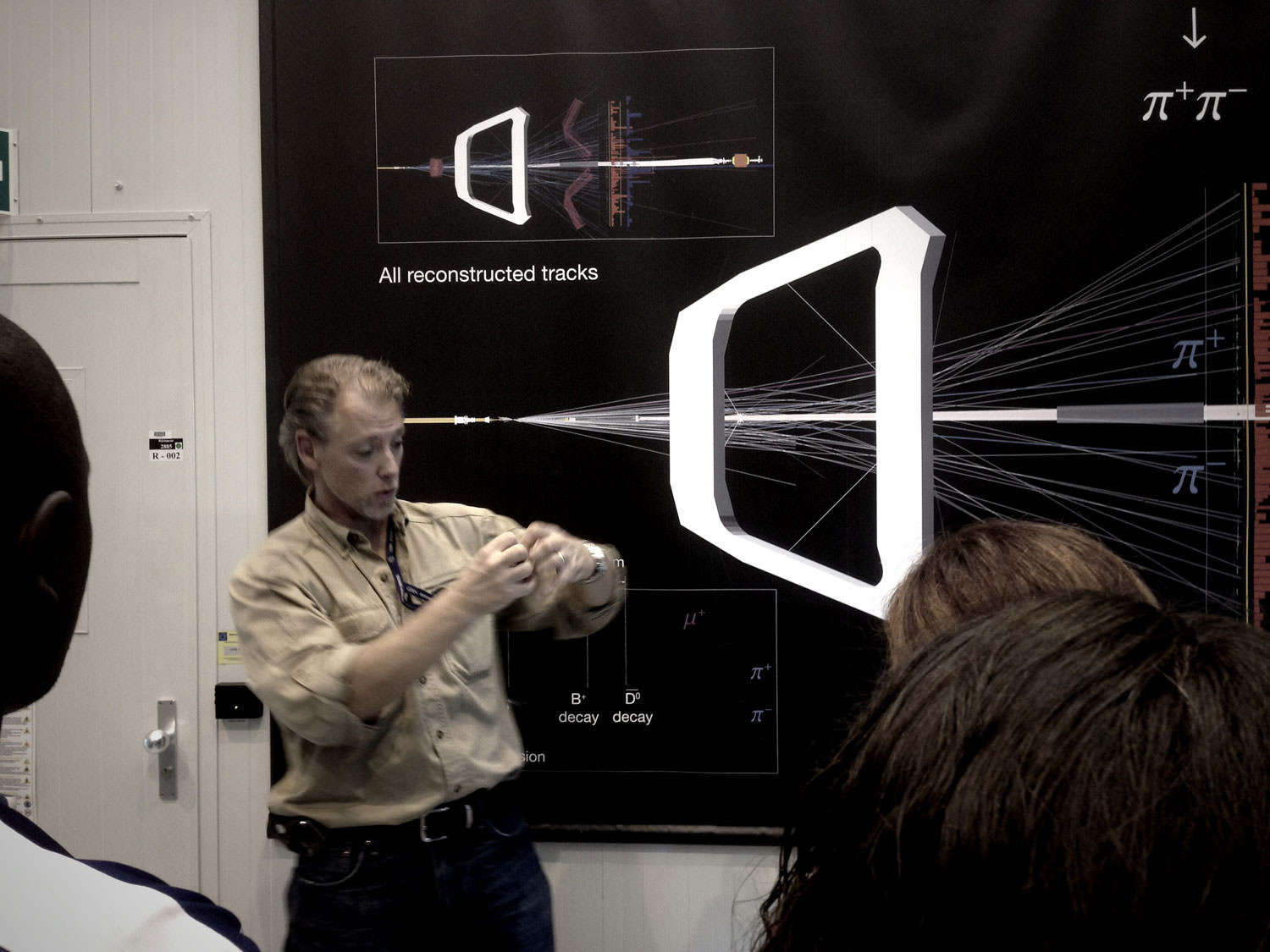 He slaps his hands again and again and tells us this — smash — this is what we’re doing — smash! Smashing things and, look — these lines that look like spaghetti on the poster behind me? — this spaghetti is the bending of particles by magnets — giant magnets — and we can guess the kind of particle based on spaghetti angle. Spaghetti angle, say it loud! We’re building smashers that output spaghetti-like images and then we spend untold hours divining those spaghetti trajectories. And inside the spaghetti trajectories live answers. And — smash — the answers are named things like strange and up and down and charm and beauty and boson and hadron.

Don’t worry, he says, you’ll get hardhats later. (We’re excited to get hardhats.) Then he says, if anything falls on your head, it will probably be another hardhat. One slipping off someone’s noggin’ as they look down. So, he says, ha ha! — we wear hardhats to protect ourselves from hardhats.

Welcome to the Conseil Européen pour la Recherche Nucléaire, or CERN, also known as the European Council for Nuclear Research. CERN is a post-war (WWII) research institute formed, in part, to keep the smarties moving nuclear physics forward for a greater good instead of inching us closer to a coordinated turn-key extinction.

Get a tour. Descend a hundred meters underground to witness the cavernous space carved out by hundreds of men and women — a would-be extraterrestrial donut floating not in orbit but embedded deep inside our earth. A donut spreading itself below the Swiss and French countryside. Below supermarkets and schools, below sunsplattered fields of grapes. Below dogs and children playing, bicyclists, old men and women, lovers.

Descend down to the donut and see the mega-magnets that weigh tons and accelerate protons to such speeds that they make 11,000 revolutions each second around a 27-kilometer track, a track of tubes that are chilled to barely two degrees Kelvin above absolute zero, and that when those protons collide beneath our unsuspecting supermarket, beneath those lovers and their post-coital cigarettes one hundred meters up — because collide they must, this being the Large Hadron Collider, not some lesser hack Swiss Proton Spinner — the protons will release so much energy, the explosion will be so great, that for the briefest of infinitesimally small measurements of time, they will be a billion times the temperature of the core of the sun.

These are the blackhole machines we’ve made underground.
Machines running Windows XP.

It’s hard to visit CERN and not be roused. Hard to not have your brain peeled back and eyes flung open. Their scientific oeuvre is built upon a litany of superlatives: fastest, biggest, longest, coldest, heaviest . The whole production composed of equal parts polish, performance art, brute force, genius, and sheer miracle.

Our guide is forty four and runs the beauty collider, or LHCb in CERN parlance. It even has its own logo. (Are there resident physics typographers? you wonder.) Within this beauty collider they’re looking for beauty (or, bottom) quarks.

Our guide was six when he fell in love with the stars and eight when he read a book about them and at age twelve he saw a photo of CERN — snow-topped Mont Blanc in the distance — and decided then and there that this place — this autonomous zone of physics — was where he must be. He first contacted them at age fourteen via a letter, arrived soon after, and is now “shackled” — ha ha! — as a full-time employee loving — clearly — every minute.

He slaps his hands.

“The Dalai Lama, on his way to Kyoto next month, will say nothing about enlightenment or miracles or Nirvana or magical powers; only about realism, and the necessity of studying the way things are with an unflinching, impartial, empirical precision. When he was here 15 months ago he told a large audience not to listen to people such as him, in robes, but to attend to scientists, who observe a universal, ecumenical, exact system of data and cause-and-effect, as beyond ideological or religious differences as the law of gravity.”

What is, exactly a collider? Well, it begins with an accelerator. Something Wikipedia explains quite succinctly: “a device that uses electromagnetic fields to propel charged particles to high speeds and to contain them in well-defined beams.” And then those particles collide.

But what does it feel like? Simply: Big. Bigger than you. Grander than you. Something of science fiction. Something borne of pure imagination. Immutable and yet so, so delicate. The circuitry exposed. Points of failure everywhere. So much potential for that “well-defined beam” to misalign itself. To fail as it did in 2008 when, “the LHC shut down when one of 10,000 soldered joints failed.”

Standing before all of this you feel a funny punch in the gut. How does one read that punch? To me it said: this is the work we should be doing. There is something irrefutable happening underneath those Swiss supermarkets. Strip away profits and year-over-year growth and similar metrics and push your nose down to the rawest of grindstones and you’ll be hard-pressed to find a more fundamental thing than figuring out — as definitively as is possible — just what the hell we’re made of and where we are in the giant nothingness of the universe. To“observe a universal, ecumenical, exact system of data and cause-and-effect, as beyond ideological or religious differences as the law of gravity.”

And what else do you feel down there? Down in that colossal space? Giddiness. The underground world of the collider is marked not by the hues of outer space, not by dark greys or blacks, but instead by bright oranges and pale whites and light blues. Like a kindergarten classroom.

You may remember of Tron, a movie you watched as a child when you were still a creature composed mainly of imagination. Tron having not been filmed at CERN, but another institute of science: The Lawrence Livermore National Laboratory.

You may find yourself bouncing on your toes and smiling. This thing before you the biggest slingshot in the world, and what kid doesn’t like a slingshot? While you may not understand its internal complexities — or the very important spaghetti output — you can understand that its the most elegant robotic strongman ever constructed. Smash these things we tell it, and smash it does.

Our guide slaps his hands and asks, Are you ready? Are you ready to go down there? Down to the beauty collider? And we are, of course. Of course we’re ready. Can’t you see? We put on the hardhats and take pictures of each other, and walk through the retinal scanning machines, and get into an elevator, which — we’re told — used to be faster but now is a bit slower, and 75 seconds later, tic-tock, the doors open, and out we step into the humming underground. 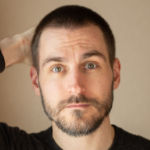 What to do when you're book sells out

On balance and the inner ear

The linearity and non-linearity of a mountian walk