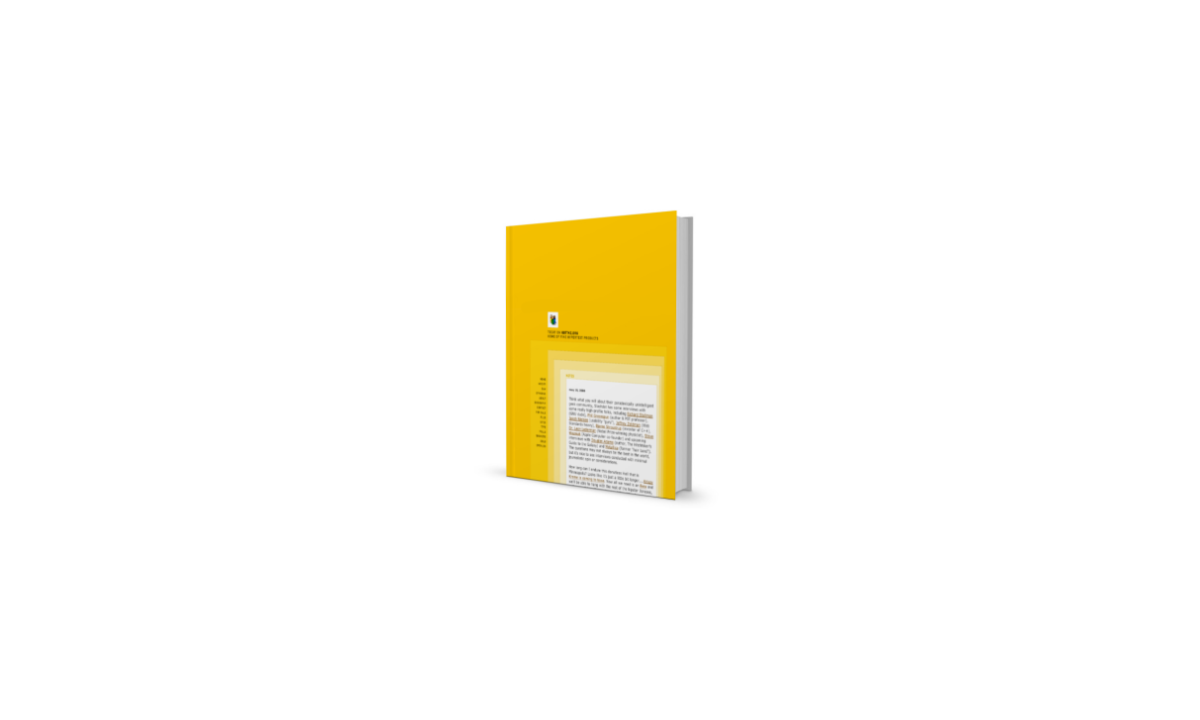 If kottke.org were a book

Jason Kottke has been distilling his brain into kottke.org for twenty years; what would that look like printed out?

On Margins episode 005 is up, featuring Jason Kottke, the creator of now 20 year old kottke.org. You can listen to the episode or read the full transcript here: https://craigmod.com/onmargins/005/.

I thought of Jason because I was thinking about non-“book” collections of text that could or should be books. I think there are many web properties that would benefit from being given immutable form, especially in the face of how brittle online archives tend to be.

JASON: Specifically with the book, one of the titles I’ve always had in the back of my mind is, “The Kottke Almanac,” because the site is so eclectic.

I think that a book would probably be going back into the archives and looking at some sort of bigger themes that aren’t evident day to day, even to me, because I’m in the stream paddling as fast as I can. I’m not standing on the bridge watching.

CRAIG: I love the framing of almanac. Even something simple like, “The World According to Kottke.org." You can imagine the design of it: facing pages have a screenshot of some website. You could break it down by two week chunks. You choose one thing from those two weeks and you go through 20 years like that.

You have this strong visual component of screenshots on the right side, and on the left, you have the text breakdown of what that was. You have dates running on the bottom. Even just that, because I think one thing that physical objects do really well is it lets us experience, say for example, a span of 20 years. Experience 20 years of web design.

Looking back over those 20 years and seeing, even just being able to flip through it and see how websites have changed so drastically during certain periods. I don’t know how you get all the screenshots. I guess archive.org you’d have to lean on a lot.

JASON: That would be the hard part. Also, blowing them up to book size.

CRAIG: I think that messiness is OK. What you could even do is print them in the book at real size, as you go through time, they get bigger because…

CRAIG: Because the resolution goes up or whatever.

JASON: And then, when you get responsive it’s full bleed.

JASON: That would be kind of funny.

There are so few websites that have been around for twenty years. Certainly so few that are not explicitly commercial in intent, built on a singular voice and point of view. Because of that, sites like kottke.org have a special emotional ressonance not often found online. For those of us who have not just used the web but built on the web for decades, a place like kottke.org becomes almost physical in its emotional resonance.

CRAIG: I was going back through your redesigns over the years. I was having these emotional moments because I first found you through Osil8 and then, obviously, Kottke. I was looking at those designs. There is something so specific about the way they look, and the design language they’re using. It’s so strong.

I remember when I saw them for the first time. It had such an impact on me, the intensity of the colors or whatever, that I remember who I was at that time. These designs have a place in my heart in the same way that a familiar corner in a city has a place in my heart. There’s this weird emotional resonance connected to those images, to those points in digital space.

Kottke.org is one of the few contemporary, still-active web properties around for 9-11:

JASON: I woke up and got on the computer. I think the first tower had already fallen. Everyone was freaking out, of course. I started doing the bloggy sort of thing, which is like, “Oh, people are posting all sorts of cool stuff. I’m going to start a post linking to all of that stuff.”

I did that and was basically on the computer all day, pretty much, with minimal breaks, just posting stuff like photos and maybe even snippets of video. I don’t think I was hosting the video, but I was posting to other…This was pre YouTube, of course. Probably these QuickTime videos that were 320 by whatever.

CRAIG: We all took down CNN.com. CNN couldn’t even handle it.

It was really incredible.

Kottke.org is subversive in a number of ways:

I asked Jason about the subscriptions, which just began, shockingly, towards the end of 2016:

JASON: I had this range of what I thought and it blew past the high end of the range two days in. I was like, “Holy crap!”

Now, it’s been going for almost a year and a half and I’ve got to say, I do this site for a lot of different reasons. It’s interesting to me. I like doing the work. I feel really lucky to be able to sit down in a chair every morning and just learn all day. I get to read all of this stuff and write about it and all of these interesting things.

I also like doing it for the people who are paying me to do it, who have contributed and who have entrusted their hard-earned American dollar, and also dollars from all over the place, actually. I really feel a sense of commitment to them that is really positive for me.

CRAIG: I think the normalization of paying for stuff has changed. When you launched the memberships, my first reaction was, “Holy shit, am I not giving this thing money?” … Wait a minute, I should be giving this thing money! Why am I not doing this? I think a lot of us felt that way. These last few years have been tipified by a realization: I think we understand the brittle nature of our institutions a little more than we ever have.

These things we love in the world are not in this world, unless we continually put energy into them, supportive energy into them. I think we felt that really strongly in the last two years, especially.

JASON: Yeah. I think we’ve seen how things like advertising and things like shareholders can twist these services that we have loved into things that aren’t looking out for our best interests.

Membership type things can do that, as well. They can tweak incentives in a way, but I think they are much more likely to tweak them in a positive way than in a negative way, maybe. Maybe that’s just a belief. I don’t know.

CRAIG: No, I think it’s true. It formalizes an already implicit contract between your readers and yourself, I think that’s a good thing for everyone.

You can listen to or read the the whole interview at https://craigmod.com/onmargins/005/. You can also subscribe on iTunes, Overcast, or Google Play.

Biking for Sugar and Bread

An electric bike ride to Ōiso