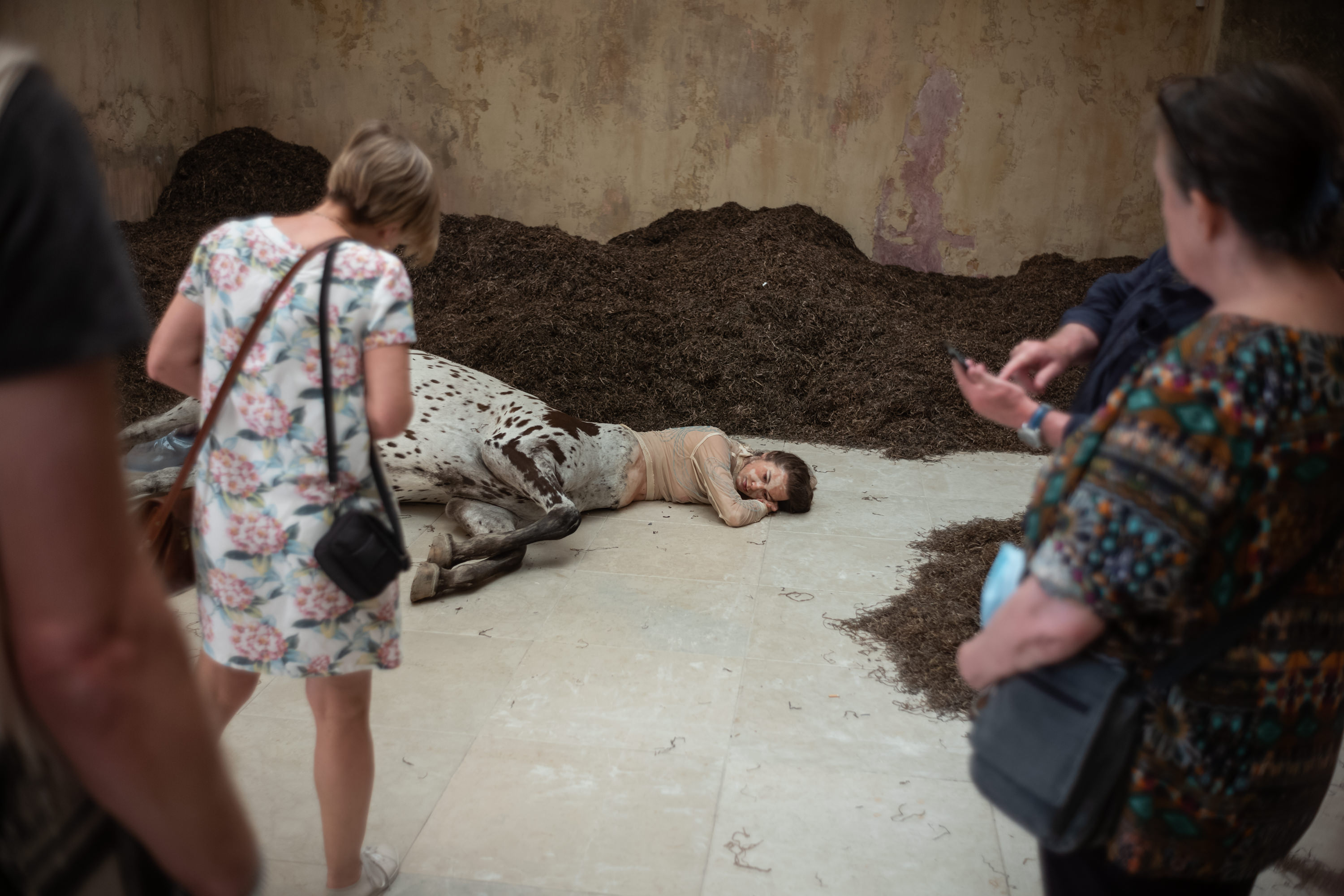 I’m Craig Mod, and once again I recommend viewing / reading this issue on the web. It’s pretty photo heavy and everything will look / work better on my website vs in an email client. Click the images, zoom in, poke around.

Venice is cursed. I walked cursed Venice in a cloud of confusion. Why did so many people bring so many roller suitcases? Did they not know they were coming to Venice? Did they not know Venice has a bridge of stone steps every fifty yards? Sweat soaked beneath the savage sun, they heaved their suitcases — all of which were big enough to hide a dismembered body or two — up and down and huffed and seemed distraught at the amount of heaving required to make headway. I helped one woman carry hers. She had a broken foot, walked on crutches. Her presence in Venice mystified like an apparition of Christ in a New Jersey hedge. As I lifted her substantial luggage, careful to do so only with my legs, not my back, she intoned in German-accented English: Thank you, this broken foot of mine vould not keep me avay, nothing vould keep me avay from my dear Venice.

Her deranged veneration seemed omnipresent and fundamental to the city. I felt surrounded by cult worshipers. But they all vanished when I ippon ura’d (“one street backed” as we call it in my Japan pop-up newsletters) the sinking town. It seemed as if very few were here to explore.

Because of this, my walking of Venice — some 20-30 kilometers over the course of a few days — was manically back-street focused. Not always, because sometimes you needed to cross a canal and had to veer into the Rimowa Thunderdome to find a diagonally-pitched bridge. Mostly, the backstreets were silent, save the fluttering of laundry along lines cast across alleys, and the assassin-like sprezzatura of the 55,000 cursed people — opening and closing those heavy wooden shutters, darting between doorways — who live in the cursed town.

I joke about the cursedness — sort of. I mean, Venice has all the classical qualities of a thing to be cursed: It’s gorgeous. Rightly revered. Every turn astounds. The lack of cars, the absurdity of the city itself (the fact that it is supported by a billion petrified telephone poles laid in mud a millennia ago), the fact that the buildings largely conform to an admirable standard of beauty and texture — all of these features create a place that should no longer exist, and yet does exist, exists largely for the pleasure of the Giant Suitcase People. Down those empty back alleys you find flags draped from windows with a big “NO” to cruise ships. Which makes sense — imagine if every day during the summer helicopters fluttered above your city and the equivalent of 10-20% of your total population descended, confused, lumbering around with pockets full of Euros? It would be … weird? (Perhaps, actually, it would be ideal?)

The more I walked the less concerned I became for the city and the more I leaned into its cursed destiny. I had no influence, anyway. No authority — moral or political of financial. I was just another idiot bobbin in the crowd. The ugliest private yacht I had ever seen was docked next to my hotel. It probably cost a billion dollars. I’m not saying the person who bought it should be executed, but someone should help them find their way before they do more damage. The facts were the facts. There was no way around them, no way to “fix” the calamity: Venice had made sense once, long ago, and now no longer did. It had become an epicenter of senselessness. The only way to survive Venice is to accept that wholeheartedly and never look back.

You may wonder why I ended up in Venice, anyway. Two friends were getting married at two separate weddings, both in Italy, a week apart. So I had that week to kill. I had visited Venice once, nearly sixteen years ago, just for an afternoon. I remembered the day fondly — pre-smartphones and Google Maps, wandering with a paper map, feeling lonely and lost and nonsensically romantic and blighted — and was curious to see how the city would feel today. I knew it was cursed, and that the tourists were insane and boundless, but I was also puzzled by what cities like Venice (and to a degree, parts of Kyoto, Tokyo, Paris, and so many other cities and towns around this cheap-airfare-flattened earth of ours) can do in the face of these crushes. So I decided to spend a whopping four nights in the city.

Also, the Biennale was going on. I had never been. It sounded like fun.

The Biennale was spectacular. And it seemed as if none of the tourists from the big boats got the message. It was strangely sparse, the incredible Giardini della Biennale. What a joy, that funky garden with old pavilions of rational sizes. The eerily vacant Russian pavilion, the rightfully lauded work of Simone Leigh at the American pavilion. I adored them all. But you could even ignore the art, in a way it was secondary; everything surrounding the art — the structures and landscaping of the garden, the views of the lagoon peeking through trees and bush and bramble — was NICE. Very nice. I ate potato chips and sat on the ground watching boats in the distance.

The Biennale as a thing, too — its physical manifestation — was so much better than I expected. The garden was circumscribed by logical, sensible gates. No one had ever explained the Biennale to me in an easily grokable way. But let me do so for you. The Biennale is: A garden, with a few dozen architecturally meaningful, permanent, reasonably-sized buildings, for which artists are chosen to “take over” and make their own. This repeats every two years. They’ve basically done this since 1895. There’s also the old boat Arsenale, just a few hundred meters away from the garden, converted into a series of installations; so the Biennale is, reductively, a garden, and an old dock with art. It’s great. You don’t need to know anything else.

I walked the art and I walked the town. I walked and walked. I got up early and walked the mornings because the afternoons were too hot. Stiflingly, shake-your-head-and-laugh hot. In the evenings, I smoked terrible cigarettes from my balcony overlooking a canal, trying to imitate who I might have thought I would have wanted to be sixteen years ago, wandering down below, sitting at night in St. Mark’s square, sad and lost and operating from a place of tremendous scarcity. Now, I was staying in an opulent hotel where a man shined my wedding shoes. I was hydrated mainly by sparkling water and I wondered what that old version of me would have thought about all of this, my strange life and pizza toast and the fact that I was still doing book-adjacent stuff decades later. The whole of this trip was ridiculous, forty days in total. Italy was at the end, weeks in. I got Covid almost instantly in England, did a big walk and had recovered enough to enjoy the weddings. And now I was “convalescing” by strewing shoe leather all over Venetian stone.

Venice is cursed, incontrovertibly. Even the ATMs. They’re perhaps the most user-antagonistic ATMs I’ve ever seen. They impose their own “exchange rate” — some 20%+ of the total value of the withdrawal from what I saw — on you and only let you “opt-out” of that rate through a series of dark, pitch-black, blackhole, devious, diabolic interface patterns that make it look like you’re canceling the entire transaction, not just their criminally high fee.

But you learn. You learn to navigate the shameful ATMs, and you learn, quickly, routes between places that avoid the crowds. You learn the Biennale is Good. And you find a talented shiatsu specialist named Lorenzo who communicates only via Google Translate. Your body had absorbed so much stress from Covid and, Lorenzo, using his mystic singing bowls, extracts the poisons from your rotten bones. You do it all. You walk the sinking city silly. The beauty overwhelms — the colors and proportions of the floating landscape. You finish the day with a simple vanilla gelato by the port. Your body feels strong, well-used, satiated. The sugar buoys the spirit. You are alive, the virus didn’t get you, yet. The sun sets. The sky blazes oranges and reds for hours. Around you, everyone is maskless and laughing laughing laughing, joyful at having arrived to their plagued dreamscape — broken feet and all — licking their fingers, paying too much to take out money, not seeing the art, fumbling with the confusing mess of life itself. And, of course, fumbling, too, with their giant suitcases.

This essay is from the Ridgeline newsletter, mailed out July, 2022. Thoughts? Email me@craigmod.com.