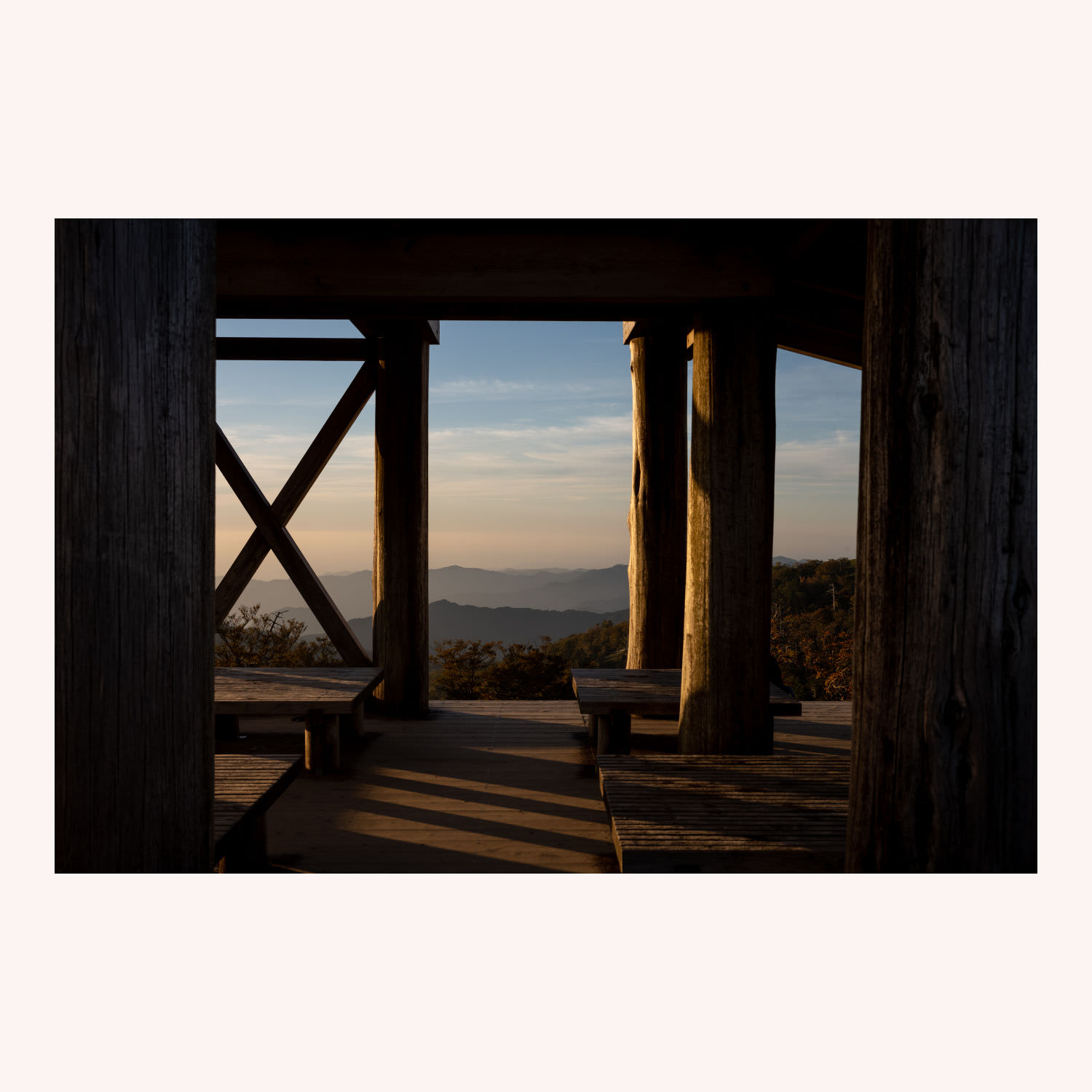 For the first time in a long time I spent some time with some strangers.

The invitation to walk came by way of Japan’s Ministry of Environment via the Hakuhodo-backed boutique travel outfit, wondertrunk&co. Come explore the Ōdaigahara area of Yoshino-Kumano National Park in Mie / Nara Prefectures, they said, and give us some feedback. We’ll pay you. You bet I got on that train.

The original plan was to camp in a nearby valley and hike up to the mountains, but some late-stage Covid restrictions contracted the trip to three days around Ōdaigahara. Ōdaigahara is both a mountain and a general area that sits between Yoshino and Owase. I’ve spent quite a bit of time (as recently as May) in both Yoshino and Owase, but had never explored this particular piece of the Kii Peninsula’s inner range.

The area suffers and benefits from the same issue a lot of inner-Kii suffers and benefits from: it’s kinda a pain to get there. I went ahead and spent a few days in Nara to relax and write. But even from Nara it was about four hours of windy roads to get to the visitor center. The other eight members of the group came in from Tokyo in one mega push. The area’s pièce de résistance is the Nishi-Ōdai Regulated Utilization Area. Walk the Nakahechi or Kohechi routes of the (somewhat) nearby Kumano Kodō and you may notice how monocultural the forests are. Cedars upon cedars for days. Logging country. Monocultural forests bankrupt fauna diversity. Scant birdsong. It’s a bit dreary once you notice.

Yoshino-Kumano National Park itself — covering a huge chunk of land and coast of Kii — was established in 1936. The Nishi-Ōdai Regulated Utilization Area is an extra special bit of private land that was bought by the government in the post-war years. It sits between 1,400 and 1,600 meters. It is fecund beyond imagination. An antipode to the monotony of the Nakahechi. The regulated bit of Nishi-Ōdai is like falling into a fractal of greenery. It’s green, and then greener still. The area has the highest annual rainfall of anywhere in Japan (4,000mm), beating out even Yakushima, the great protected island off the coast of Kyushuu, home to those famous ancient cedars.

After a video session to learn the rules (don’t stray, don’t touch anything, don’t freak out the animals, pee in a baggie, there is almost no wayfinding because the goal is to keep the area in as “natural” a state as possible, etc etc etc), we walked that regulated Nishi-Ōdai zone. Our loop was simple. 10km. We took it slowly. Mori-san the guide, kind and kind-faced, aged somewhere between 65 and 98, named every organic object in view, every mushroom and tree and leaf and seed and animal track in the mud, every blot of moss, broke out a pad and drew the names of things, explained their etymology. Did you know buna (Beech) is written “橅” in kanji — literally “tree nothing” or “not a tree.” The wetness of them made early botanists question their inherent treeness. Did you also know that buna is a favored wood for pachinko machines? Now you do. And we know Mori-san is a pachinko aficionado, too. 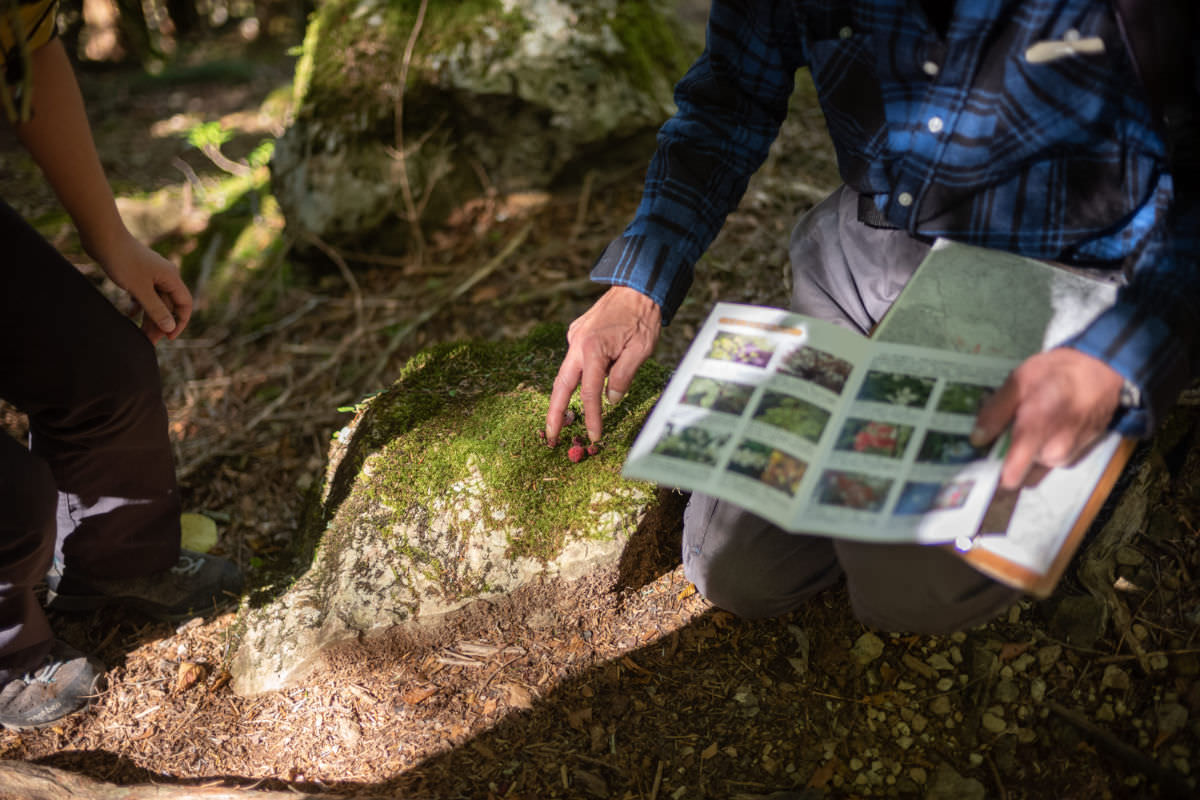 Mori-san also smoked, which was surreal and bizarre. I’m not trying to get anyone in trouble but it’s worth noting the dissonance of not being allowed to veer from the path, from touching anything beyond the thin boundaries of our route, of going so far as to brush off our very shoes off before entering the protected zone to keep foreign seeds and debris out, and our guide’s smoke breaks. It felt like an only-in-Japan moment, of a generation soon to be lost. It was too mystifying to be distressing, and we had two rangers following along who didn’t seem to mind one bit.

I know they didn’t mind because they wouldn’t let the poor guy break any rules. Every twenty minutes Mori-san would ask if he could sneak off trail a few feet to show us something — a leaf or nut or animal track — and they kept saying no. At one point the younger of the two female rangers (early 20s?) said, in a kind of brazen and hilarious spat of unintentional passive aggressiveness, If you think it’s of ecological import, we’ll bring in a specialist and I’ll carefully take them off-trail to gather samples so we can analyze the finding. You got the impression Mori-san would have been climbing the trees to pluck eggs from nests — out of the sheer joy and love he had for what was all around us, and his intense, almost irrepressible impulse to share and explain — were they not with us.

Despite the rain fame, we were lucky with the weather. Sunlight galore, dappled bodies in early fall coolness. A day of maximum minus ions and so-called forest bathing. We were bathed in an untouched, mossy beech forest, and all the better for it. 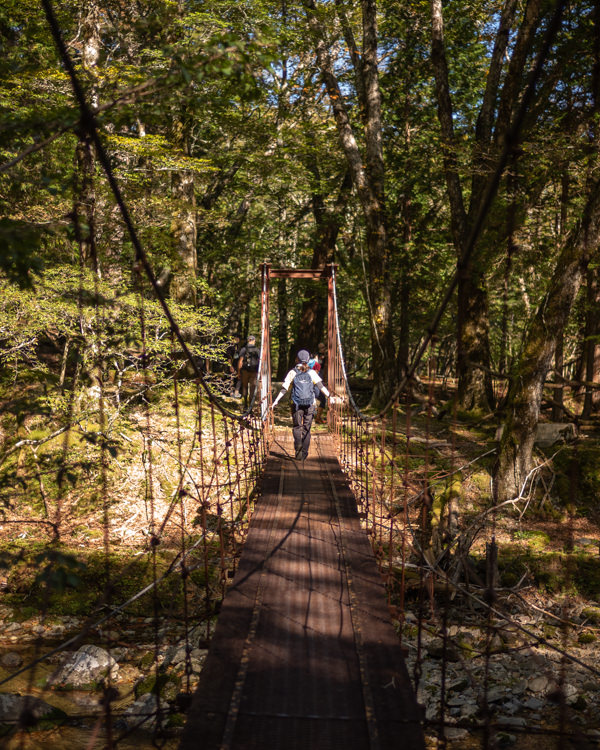 Next to the Ōdaigahara Visitor center is a fine mountain lodge that serves breakfast and dinner and has six-mat private tatami rooms and a big metal communal bath. If you wander outside at midnight you’ll find a parking lot full of families snoring in vans, and star gazers looking up to the galaxies in plain view, the sky shimmering down to the horizon. 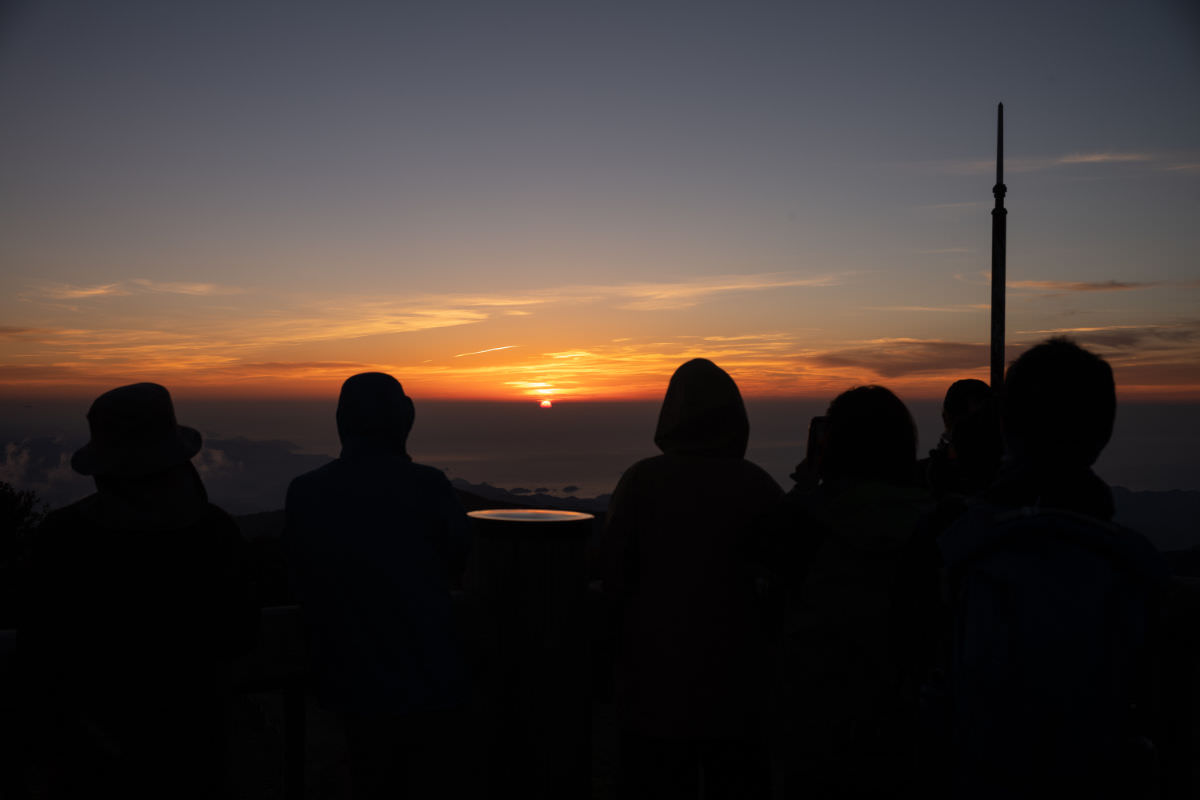 Our other walk was around Higashi-Ōdai, 4 a.m. wakeup, sunrise hike. We made it to the viewing platform on Hidegatake and watched as the sky cycled through pastels and the life orb rose from a soup of Pacific Ocean, an ocean with the consistency of grey lava, and then that greyness burnt off in a flourish and the orb smoldered and mist rolled over the mountains with the drama and speed of wild ghost horses trampling a civil war battalion. 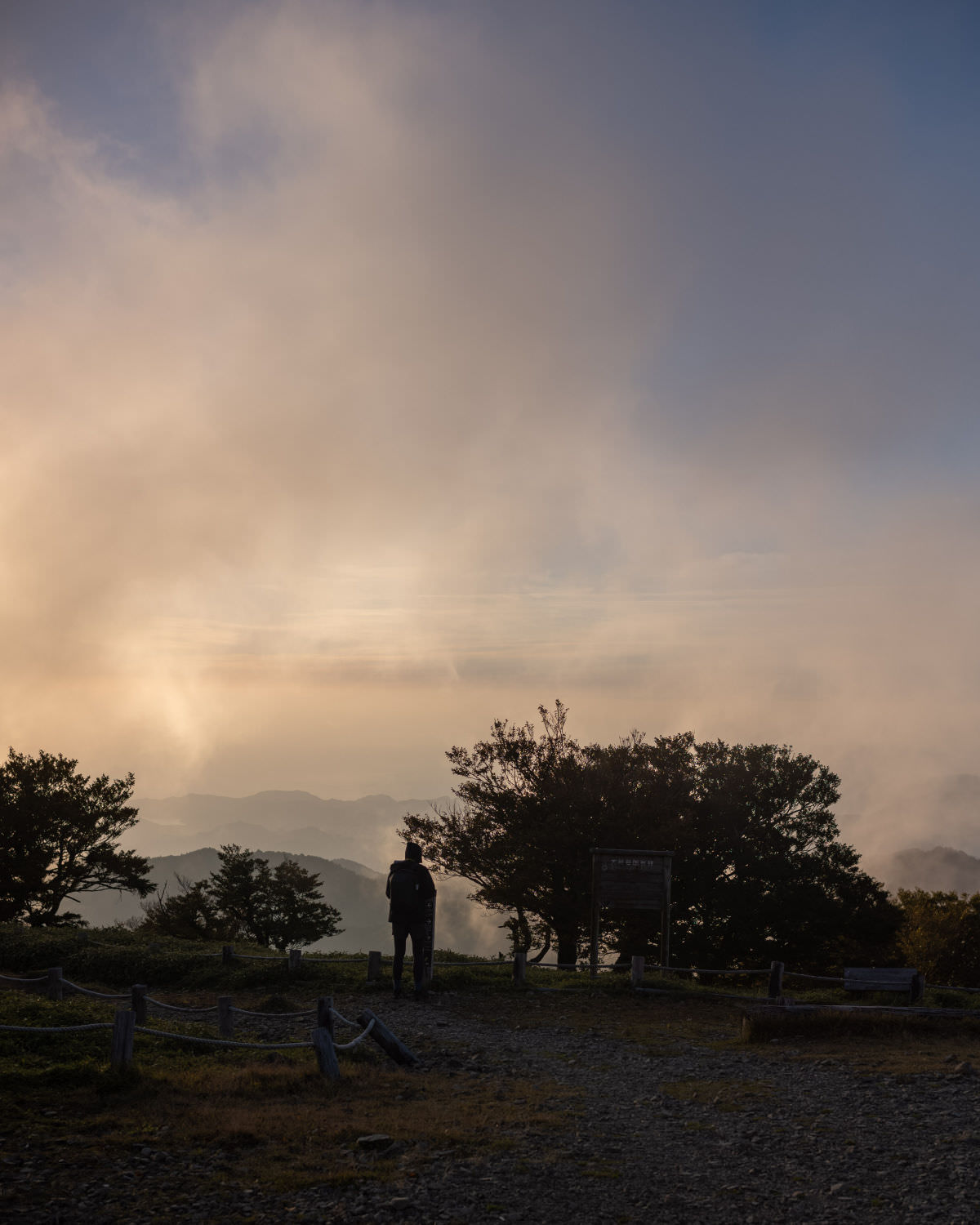 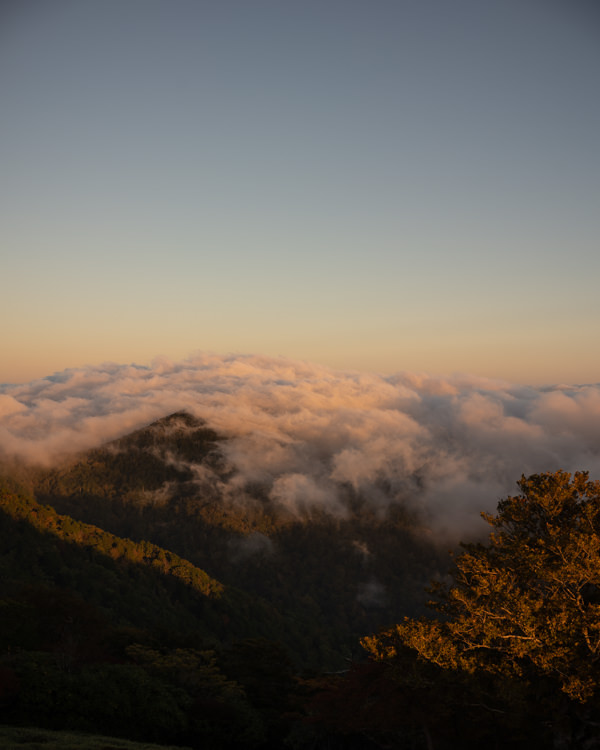 Most impressive, for me, wasn’t that insane morning nature show, but the fact that you could see most of the Ise-ji from this vantage point. I had no idea. There, north was Kii-Nagashima and Furusato Onsen, and a bit south, Magose Tōge and Owase City and the brutal Yakiyama. And on and on, the whole of the costal route, a route I’ve walked several times but one I’d never seen from this angle.

It reminded me that even though Japan is a “small” country by satellite view — occupying a map-space roughly that of California — Japan is actually, deeply deceptive in surface area, and were you to flatten out all these mountain ranges, the overall hecterage would trounce our basic impressions. The rest of Higashi-Ōdai was “unrestricted,” a bit more developed than Nishi — walking planks and staircases and a wild blade of rock jutting out with some protective rails and all that jazz. Whereas Nishi was a tunnel of pure green, Higashi was maximally varied with views down into valleys and across the peninsula. Our route was fairly short and at the end I had wished we had taken a longer loop. 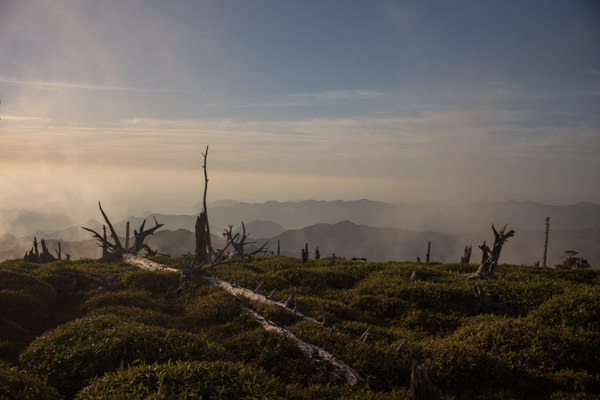 The area is worth a visit, certainly, but unless you live in Osaka or Kyoto, it’s difficult to recommend only this Ōdaigahara bit, especially from Tokyo. The superpower of Japan is that there are resplendent slabs of nature to explore in almost every nook of the country. So I think this Ōdaigahara area works best in concert with part of the Kumano Kodō, in particular the Ise-ji, given the overview finale. Swing by Owase, maybe set up base in the bizarre Hotel Viora, hike the peaks nearby, visit Shingu and Nachi Falls, and then make a beeline inland for Ōdaigahara and marvel at the differences between parts of earth manipulated by the human hand, and those parts left as they were for millennia. This essay is from the Ridgeline newsletter, mailed out October, 2021. Thoughts? Email me@craigmod.com.