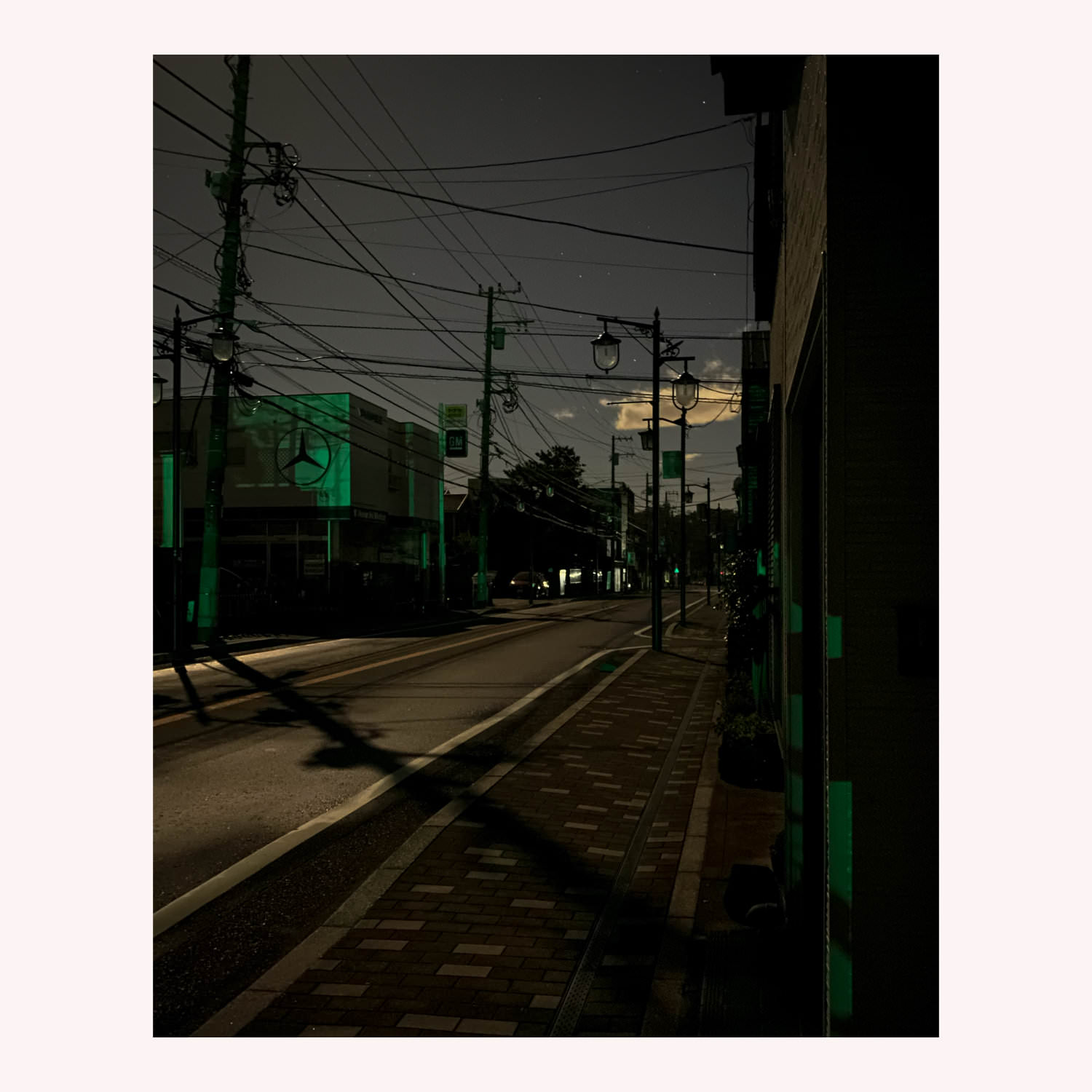 The 19th typhoon of the season, Hagibis, swept over the general Kanto area of Japan yesterday afternoon, departing some eight hours later. I hid in my house. The winds had been ferocious. An earthquake shook Kanto part-way through. The storm doors on some of the windows were blown open, debris from the mountain behind my house shot in through the vents. I lost power. I cooked some pasta on my gas stove as lit by a solar camping light. I hid in my tatami room where the storm doors were holding and read My Year of Rest and Relaxation while listening to a brutality of nature out of my control.

And then, quiet. The rampdown was swift. It was midnight. I decided to take a walk.

All the lights were out. The lights in homes, of course, but also the street lights, the vending machine lights, the small LEDs that now dot our landscape connected to a million little networked objects — all out. The moon was nearly full and the sky completely clear.

Disasters degauss the world. Post 9-11 there was an eeriness to the lack of ambient plane noise up above. After Katrina, in New Orleans, the Milky Way was visible to the kids in the 9th ward in a way they may have never before seen. And here, now, in this town outside central Tokyo, was a similar quietude. A sort of not-quite-rightness about the silence. And yet — a feeling of goofy enchantment, of having wandered onto a Truman Show-esque set they had forgotten to populate and power on.

Everything had shadows, was plainly visible. It reminded me of a forest night walk. The moon was that bright. Or, maybe, the sky was simply that clear. Even with the moonlight, major constellations were easy to pick out between the dark roofs of neighboring houses.

I walked the back alleys. Nothing stirred. Nobody else, it seemed, felt compelled to walk. Silence was freakishly total. Things were largely undamaged. Which seemed miraculous considering the violence that had just poured out of the sky. The rest of Japan was not so lucky. Here: Tree branches were strewn about, but no windows were broken, no telephone poles knocked down. Nothing flooded. Beneath the road the drainage systems and paved-over rivers rushed like rapids; if you stood above certain grates the sound was almost deafening.

The main shopping street was vacant. One traffic light blinked, running on some backup generator. The moon floated directly above the road, desaturating and casting the store fronts oddly pale. It reminded me of Annie Dillards’s eclipse description:

The sun was going, and the world was wrong. The grasses were wrong; they were platinum. Their every detail of stem, head, and blade shone lightless and artificially distinct as an art photographer’s platinum print. This color has never been seen on Earth. The hues were metallic; their finish was matte. The hillside was a 19th-century tinted photograph from which the tints had faded. All the people you see in the photograph, distinct and detailed as their faces look, are now dead. The sky was navy blue. My hands were silver. All the distant hills’ grasses were finespun metal which the wind laid down. I was watching a faded color print of a movie filmed in the Middle Ages; I was standing in it, by some mistake.

I stood in the middle of the road and took photos. Marveled at how much my sense of location was based on light — how much was contingent on triangulation by dazzling convenience store signs. It seemed inconceivable that the Lawson and the Family Mart would be dark. Where was I? How far has I walked? But the world didn’t feel wrong. The street wasn’t wrong, the shops weren’t wrong. It felt like what the street may be some day: quiet and finished, done. It felt like some ayahuasca-induced time-traveling to when this was all, like, completed, man. It didn’t freak me out. It was analgesic. A weight of — I dunno — maintenance? was lifted from my shoulders. It was one thirty in the morning and the worst storm to hit Japan in the last 60 years hadn’t done so much as even nudge the street by a millimeter. That seemed hopeful.

I ducked back into a small alley. Looped around close to my home. I was light-footed, almost dancing. The moonlight felt good and the otherworldliness made me grateful I had stayed up and had had the sense to go for a walk, all alone. I was about 30 meters from my house when I almost skipped straight into a downed power line. I remembered seeing “lightning” flash outside of the paper covered glass windows in the tatami room and thinking how odd it was I didn’t hear thunder. But I assumed the winds were so loud I simply couldn’t hear it. No, it had been this line, exploding and crashing down to the pavement. I was about a foot away. I jumped back with a yelp. A flashlight pulsed in a nearby window.

My vision was bleary and the moonlight played tricks on the depth of things, where lines began and ended. I felt the gushing release of close-call chemicals. Backing up and nervously laughing to myself I looped the other way around the block, trotting up the stairs to my house, reminded that maybe a walk immediately after a typhoon was kind of reckless, but also delighted, and reminded as much to always take a quiet and slow and circuitous peek at the world once the winds die down.

p.s., Running low again on “walker bios” — reply to this email with a sentence or two if you’d like to be included below in a future Ridgeline.

“Walking has always been integral to my day-to-day. Though the lion share of my day-to-day walking exists because of necessity, I now tack on a brisk 20 min walk after dinner on most evenings. This (healthy) habit has benefited me immensely—chiefly in the sleep department—over the past two years; I’m hooked.”

“I was torn from the outskirts of the New York metro area, where I could sometimes read outside at night - when the clouds blocked out the stars and bounced the city lights back down to Earth between our tall trees. Over a decade ago, I left that suburban bubble for the old mountains of Vermont, with occasional detours to meander around far flung corners of the world and learn new tongues with which to listen to people’s stories. Now I’m back in New Jersey, thrilled at learning to teach and share what I’ve learned on my travels. Yet I yearn to walk away from the city lights again, back towards the mountains and into night skies filled with stars.”

This essay is from the Ridgeline newsletter, mailed out October, 2019. Thoughts? Email me@craigmod.com.