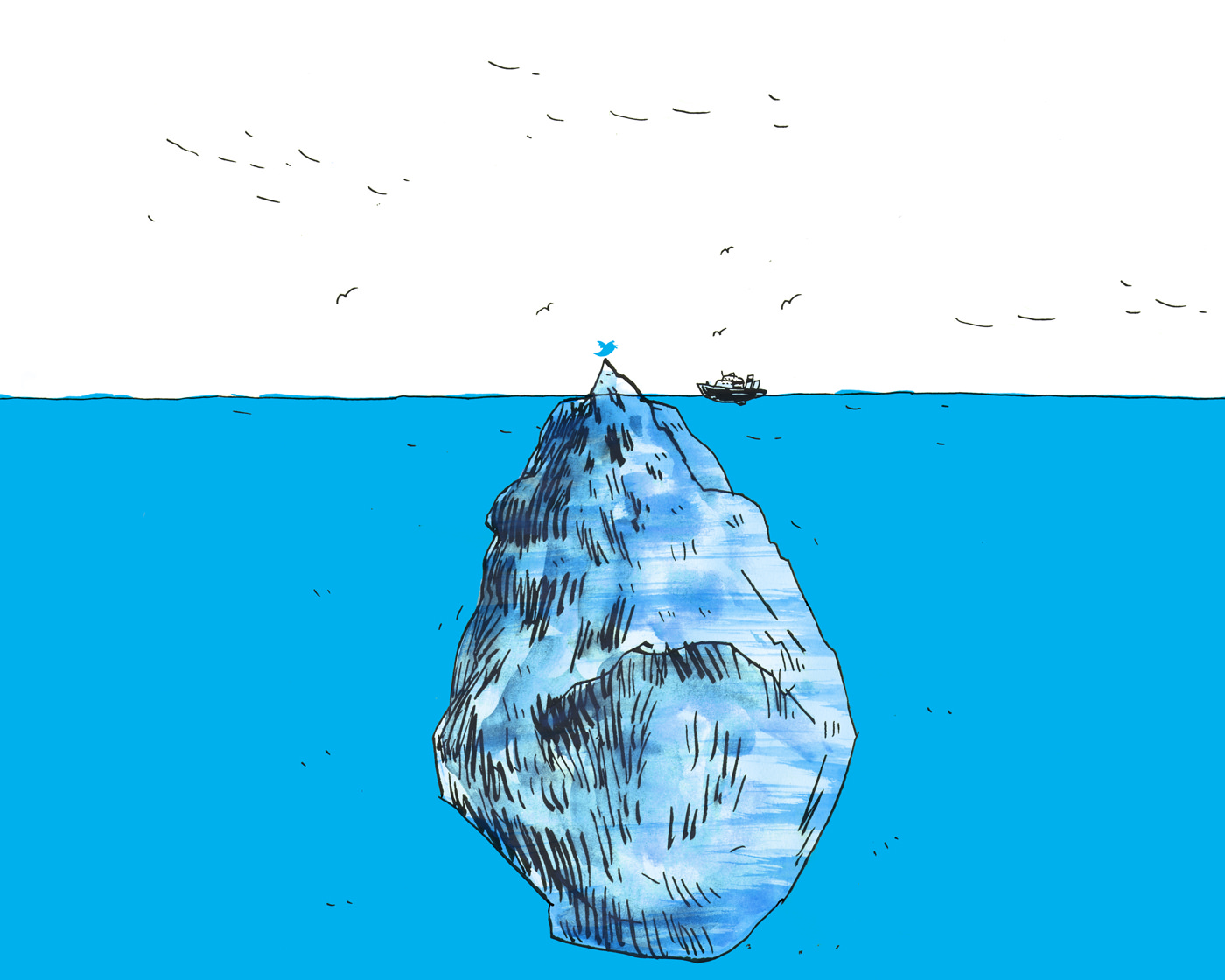 Twitter is a platform. A networked broadcast system. A bullhorn. A rage machine. Twitter is a revolution instigator and kingmaker. Twitter is food photos and fart jokes and AIDS jokes on the way to Africa and erroneously messaged political erections. It’s stumbles and poetry and breaking news.

Tweets — the units of Twitter — are becoming more and more complex. We barely see more than 140 characters, and yet below the surface they grow deeper and broader by the day.

Icebergs come in all shapes and sizes. The tweets of today are like tiny icebergs: small amounts of data live below the surface. But what happens as they grow? How will our future tweets function with universes down below?

In the near future, an iceberg tweet will cleanly separate all meta-data from content. @-replies and hashtags won’t count towards the character limit. Anyway, the 140-character maximum has become arbitrary and misleading: A tweet is already more than 140 characters. A tweet contains geo-coordinates, favorite and retweet counts, pointers to replies. And the provenance of that character limit (cellular SMS texting) has long since been rendered moot.

An iceberg tweet will be media rich. Photos and videos attached to tweets appear in our current timelines. But iceberg tweets won’t count the photo URLs against the 140-character count as they do now. They won’t have media limits. You’ll be able to attach far more than a few images to a single tweet.

An iceberg tweet will be — controversially — composed purely of tweets. A collection of tweets. Will simply be a comment atop a grouping of tweets. Tweets all the way down.

And — most controversially, most seemingly subversive of the original intent of Twitter — an iceberg tweet will be the start of an essay written on Twitter itself. The 140 characters comprising a public,pointable, embeddable title. We already capture snippets of life in real-time on Twitter, only to follow up — expound and expand — elsewhere. An iceberg tweet collapses that space.

In other words, all tweets will have the potential to be the tip of a broad media iceberg — one composed of single or multiple photos, videos, actions (such as subscribing to a mailing list), short- or long-form writing, and groupings of other tweets. The tip of an iceberg tweet will be the same malleable and sharable, lightweight commentary container or pointer we have today, but with added depth. A sort of super-URL.

We see hints of what these icebergs will feel like with Twitter cards. Twitter cards allow you to overrun the character limit of a tweet by having the referenced URL bring with it its own media. For example:

"Travel to passions, not destinations." https://t.co/cFKEuo3qKG

just setting up my twttr

On the precipice of culinary delight. pic.twitter.com/bzqFRlPEKb

This last one is more complicated than it looks. There’s location data, of course, which has been part of our tweets now for almost five years. But there’s also person data — two people are tagged. Not @ referenced, but tagged as part of the media, existing well beyond the 140 characters.

Already, some users use Twitter in iceberg ways. They hack the added depth and functionality described above into the fabric of today’s Twitter.

Novelist David Mitchell, in anticipation of his new book, The Bone Clocks, recently spent a week publishing a short story, “The Right Stuff,” on Twitter. He (or his Twitter operator) posted the 280-tweet story in 20-tweet bursts, twice daily over the course of a week. It begins:

The final collection of tweets exists as a set of disconnected units, despite the intent of stringing them together in narrative chunks.

Mark Andreessen, the co-founder of Netscape and Silicon Valley venture capitalist, has become Twitter-famous for his so-called “ tweet storms.” He unleashes screeds as sequentially numbered tweets. Lets them mingle in timelines willy-nilly. Sometimes they look cohesive but often they’re broken up by other tweets from other users.

Since this storming is a hack upon Twitter, it’s difficult to capture all the “storms” in their native environs. The website yvoschaap.com has done the capturing for us. So far, Andreessen has “stormed” on 102 separate topics.

Novelist Teju Cole (Open City, Everyday Is For the Thief) has been using the obscure custom timeline feature to create his own loose narratives. To take bundles of tweets — some his own, some from others — and collapse them into a single, contained stream. For example, his “TV Guide” stream emerged spontaneously from his timeline, a funhouse of photographs containing televisions.

Twitter has a history of this: its users forcing features or functionality upon the product that the company has yet to deliver.

One of the joys (and frustrations) of using the web is that it is living software. And one of the joys (and frustrations) of using living software is watching that software evolve as you use it. Those of us early Twitter users know that for many years, Twitter itself did no evolving. Twitter was born as something of an accident — a side project of a side project — and the faster it took off, the faster we took down its own servers. And, yet, that didn’t stop us from shaping it.

Launched in 2006, Twitter was defined by fail whales for three, four, five years. Twitter was rickety. Unreliable. Twitter collapsed left and right under sport and political events. Under music awards. Under anything that focused the collective tweetery of its user base. (Today, even still, it collapses under Ellen .)

While Twitter was trying to keep its burning servers operational, we users were busy evolving the software. Rather than let the company dictate what we could put into the tweet box, we told Twitter what it would become by putting what we wanted into the tweet box.

We willed into existence a way to talk to one another (@ replies):

@ buzz - you broke your thumb and youre still twittering? that's some serious devotion

We willed into existence a way to group tweets (# hashtags):

how do you feel about using # (pound) for groups. As in #barcamp [msg]?

And we willed into existence a way to share tweets (retweets):

ReTweet: jmalthus @spin Yes! Web2.0 is about social media, and guess what people like to be social about? Themselves. Social Narcissism

Here, we were laying the foundation for iceberg tweets — tweets beyond Barrier 140. We were telling Twitter how we wanted the product to function. Telling Twitter we wanted more than just text. We wanted to point to things within the ecosystem. Do so in “native” ways. Twitter eventually acquiesced and built these functions into the core of the product.

With each small update, the iceberg just below the surface of all of our tweets grows. Simultaneously, users like Cole and Mitchell push and pull at the edges of how we’re “supposed” to use Twitter. Are pointing, perhaps, to new ways in which the iceberg will expand.

Once again — as we did years ago, as we never really stopped doing — we continue to shape the product.

And day by day, the data just below the tiny unit tying it all together grows. Bit by bit, the iceberg expands.

Traveling space, if not time, to say hello to Capote and Brando

Kevin Kelly and the Golden Age of World Travel

Categorizing and breaking up this corpus of writing into sensible groups