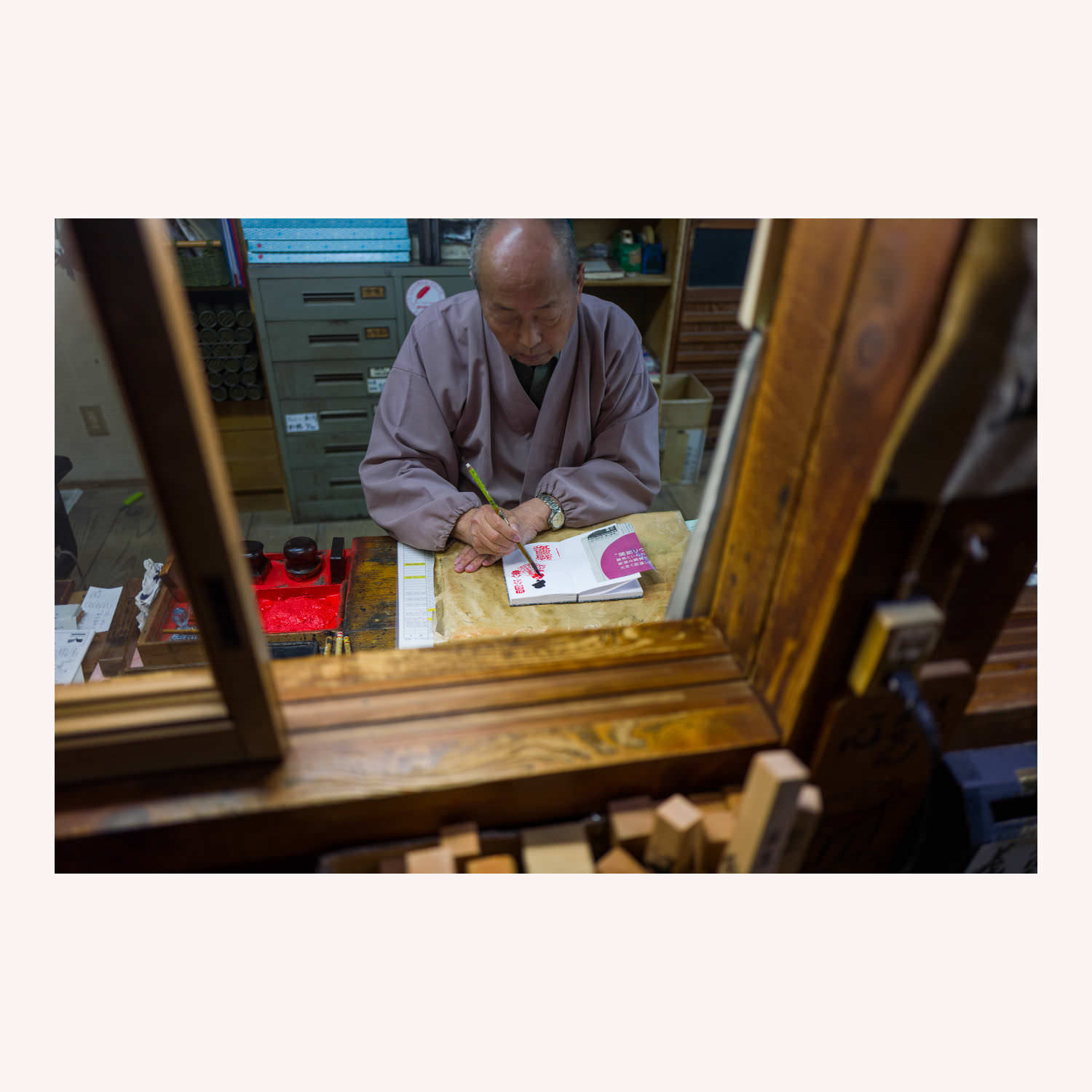 Let me try to explain how I’ve felt these past few weeks by way of pained or overreaching metaphor:

It was as if we were all walking the Shikoku pilgrimage together — all of you out there reading, and especially all of you who had purchased Kissa by Kissa, and the printers I was working with, and, who knows who else. Spirits and demons, I imagine from past lives. Anyway: The group was large, is what I’m saying. And I was leading. Or at least, I was the one with the map. Self-cajoled into Pied Pipering our crew. And we had — despite the obvious logistical impossibilities of this in real life — managed to do this walk together, several thousand of us simultaneously, around the four prefectures of Shikoku, starting at temple number one and getting all the way to temple eighty-seven.

And it was a good walk, glorious, one might be moved to proclaim, in a moment of hyperbole. Nobody died or maimed themselves. It took us about six weeks. Six weeks through the cedar and oak forests, picking out temples from between the trees, throwing down our hanyashingyous with gusto, leaving a plume of incense at each temple so voluminous that, seen from afar, might have been mistaken for a forest fire, or some kind of ancient communication method — plume after plume after plume. Loud chants. All of that. We did it, we loved it. We smelled terrible.

We had several rules, of course, as you do with any good walk, but on our Shikoku walk we had one that we all decided we would not break. And that was the no no-walking rule. From temple one to temple eighty-seven we only walked. Not a blip of anything else. No bikes. No roller skates. No roller sneakers like the kids enjoy these days. No phony so-called hoverboards. No pogo-sticks. Just feet, falling forward, finding a little pocket of balanced grace each time, just enough to not land on our faces. Hell, a giant bus offered to take us the last ten clicks to some temple through a torrential downpour. We refused. Some of you gave him the finger, the bus driver. Up yours, we only walk!. Whoa, alright there. Calm down. Yeah, we were into the strictness of the walk.

So, our last day, from temple eighty-seven to eighty-eight — we feel good. Damn good. As we should. Some of us may be hallucinating. Folks have shed some twenty or thirty kilos. And that feeling of goodness is in part because of the rigor and strictness of the walk. How we didn’t cut corners. We walked the whole dang thing. Not a meter left untouched.

Just as we’re walking up the last few steps, the roof of temple eighty-eight beginning to show, I have this nagging feeling in my gut. Something isn’t quite right. Mid-stride I pull out the map and start looking back over things. A few weeks prior had been a tough day. Sleet, rain, like ten buses that all offered us rides, and we turned them all down. Spirit crushing. That was the day we ran out of delicious protein bars and had to eat the garbage ones that taste like cardboard and sand and instantly make you wish you could undo the life choice of having eaten the thing. I’m looking back over the map, the ground we walked that day and, sure enough, like a cancer splotch on an x-ray, I am certain we missed temple sixty-six. The little bastard temple. Tiny, barely even temple-like. (Note: I have no idea if temple sixty-six is small or not.) We walked right past it. Right past the thing. Our walk was compromised. What do we do?

Heart falling out of anus, or heart rising into throat — either way, a lost heart in a moment of disbelief, unreality, shitty news. I’m sure you know this feeling. That kind of panic moment. For, you see, about ten days ago I discovered a printing … flaw? — not a mistake, per say, but yes a technical mistake, but more a flaw, something fixable — in Kissa by Kissa, that surfaced a very shitty potentiality: We may have to pulp and reprint the thing.

It knocked me down something hard, this weird blip. It felt like how I’d feel if I led us to miss a temple on a six week walk. Bad. I know, I know — just a book, not the end of the world. But, still, you know — just a walk, just one person dying of hunger in Africa. This “just a” thing spirals out of control pretty quickly. I like to clamp down on, and fully own, the “just a”s I have the power to control. I think that’s important. Margins matters. If we had to pulp, I had no idea when I could get the book to you all. A month late? Two months late? Blargh.

So. Tldr: the books were able to be “fixed” (really, just “redelivered” properly is the better way of thinking of it). They’re fantastic. I suppose a shrewder bookmaker would just keep this from you, but I think the fun of this shared process is airing some of the pains and bumps. We can get into the technicalities later. But in hindsight, the issue was a relative nothing (as so many things we perceive to be “life-ending” are).

The books were supposed to ship a few days ago. Now they’ll ship in a few weeks. I’m scheduled to sign them on October 5. Fingers crossed! (It’s all, technically, still “on schedule.")

Back in our strained metaphor, I stop the group and say: Oh, damnit, I’m so sorry, we missed one. We missed a freggin’ temple back there. The only way to keep it “real” and true to our walk-mission is to backtrack. Just a scant thirty meters from eighty-eight, we need to go back several hundred kilometers, back over Ladybody Mountain, back down the valleys. It’ll go faster because we don’t have to stop and do our usual prostrations, but we need to make our way back to sixty-six, to touch that temple, in order to be full-blown completionists.

Everyone looks confused. What do you mean? They say. We went to temple sixty-six.

Sure enough, they open their stamp books and there’s sixty-six.

You blacked out that day, they say. We dumped you in a wheel barrel and pushed you through. Your leg dangled out of the barrel and your foot sort of skipped along the ground in a way that was, well, it wasn’t quite “walking” but, good enough, no?

As a friend said, “You’re working with atoms, not bits. Shit gets messy.” This is true. Making a book and a long walk have a lot in common: Most obviously, a need for improvisation. And a willingness to know what rules are unbreakable and which are OK to bend.

Regardless, if you screw up, you just walk more. Getting good at the walk-back seem to be a critical skill in cultivating a fullness of life (as opposed to an exasperation of life, a frustration of life). You walk back to sixty-six, you get your stamps, you walk back to eighty-eight, you finish. You reset the total length of the walk in your mind from 1,200km to 1,800km. This is the way. If we had needed to pulp the book, so be it. Not ideal, but that happens, sometimes, when making physical things.

This metaphor is coming apart like a McConaughey falling through a blackhole, so let me just destroy it by saying: We’ll walk Shikoku again and again. It’ll become more familiar and less familiar in parts. We’ll probably miss another temple somewhere along the line. Or not. Heck, maybe we’ll even hop on a bus.

In other news: I’m off to Kyoto tomorrow for a week to bear witness to the city in a time with no tourists. I know it was even more spectacular in emptiness in spring and summer. But I figure now’s a good a time as any. It’ll only get more crowded going forward. And the chance that this configuration of zero-tourists (from outside the country, which, constitute most all of the tourists) and yet safe-feeling travel will happen again in my lifetime — well, that feels rare indeed. If you have any ideas for where I should go, which temples or shrines might be interesting in this moment of stillness, please share. I’ll be hitting up the usual suspects, but always looking for additional tips.

Thanks for walking along,
and for, sometimes, shoving me in a wheel barrel,
C

Born in the Pasfic Northwest, reared in Southeastern Connecticut (where I still reside). I walk, and because of a birth-defect in my feet, I hurt. But I still walk, because I am able to and I am grateful for whatever kind of motion I can get. Biking has been more my recent love and has saved my life. Moving as meditation, moving to calm my chattering mind. Keep going, and take care of yourself and your feet.

Early in life, walking was not much of a thing. As I moved and eventually lived abroad, walking became the way to see things and make photographs. Since then, life has brought me back home, including the walking. Now less for photos and more to feel a part of the neighborhood and its surroundings.

091
Self-Improvement and the Big Walk