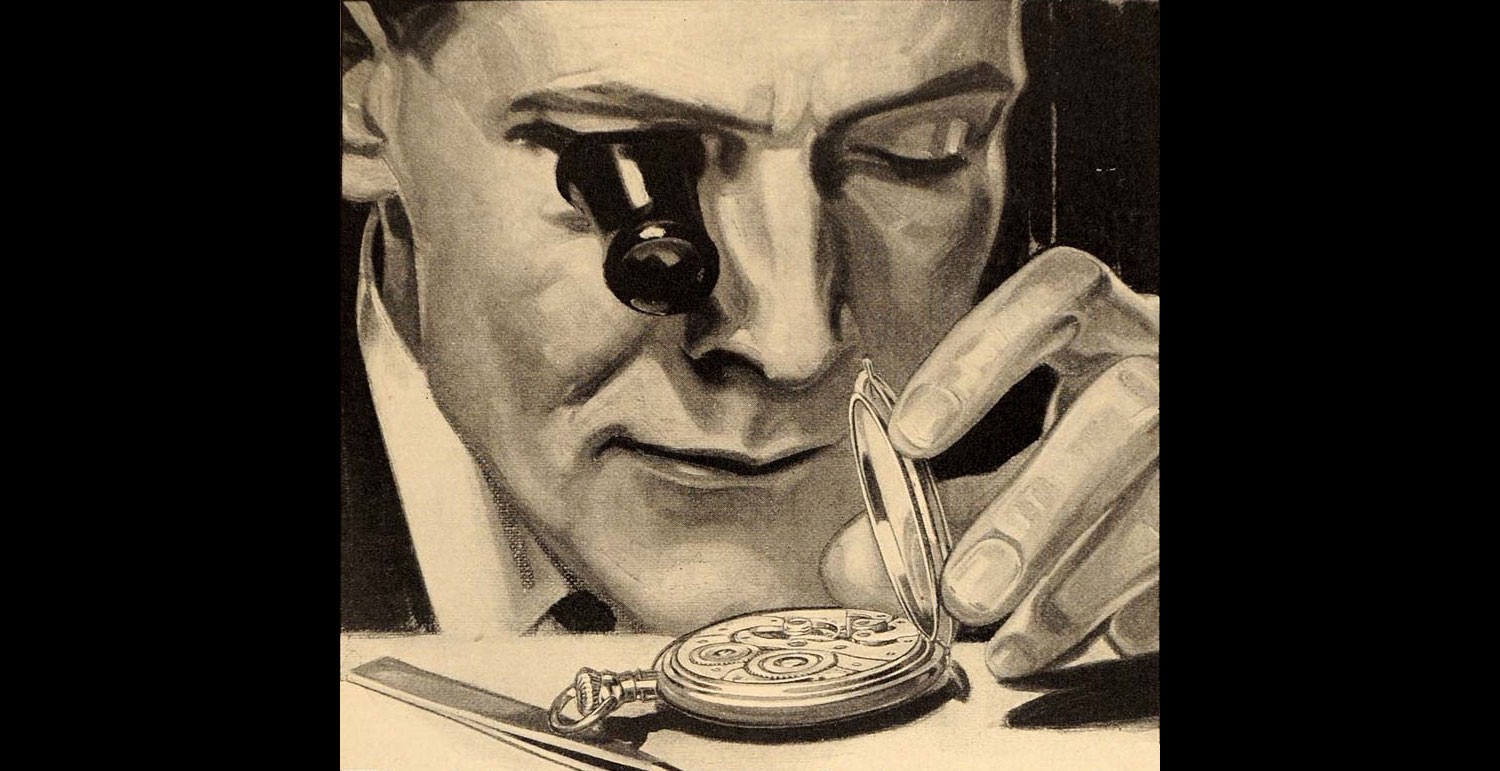 A week with Apple Watch

It is on my wrist. Do I wish it to be? Not really. Did I crave it? No. Well, maybe a little. I am human. And it is new. And it contains media. And itself may be new media. And it is good to know about these things. So it is on my wrist. This thing, black like crude oil upon Daniel Day Lewis’ brow. Quiet until it pings, so gently, like a sound from the future, bringing only a message to stand up you lazy man.

I made an appointment. For this thing. On the wrist. This thing which I did not crave, and now, after a week, still do not crave. I do not wake up and reach for it as I do the other things of glass and metal. It fills me neither with joy nor malice, this wrist thing, tiny and black, like a nugget of onyx pulled up from the earth’s core, it disappears. For it I have no disdain. I am simply its neutral companion.

Very few notice the thing on the wrist. That makes me happy. But some do see it. Once they see it they say, Oh is that the thing? And I say, Yes it is the thing. And they ask, Has it changed your life? And I shrug. And they are so disappointed. They want me to say, Yes. Yes it has changed my life. The wrist thing. It’s made me a better man, a stronger man, a more thoughtful man. But, no. This is what I say: I say, Look, it shows maps. And they Ooooo. And I show them the remote camera and they Ahhhhh. And I say, look — my heartbeat. And they say, Wow, you have a high resting heart rate. And I sigh and say, I know. Oh, how I know.

After they project their disappointment that it does not change lives, that by merely owning the thing you are not better, I let them try it on. They are then excited. Hoping perhaps for me to be the aberration, that upon their wrists it will bring betterment. I bought the smallest one. The thing for the wrist. I would say, of the ten people who have tried it on, for eight it was the perfect size. The early reviews scoffed at the small version of the thing for the wrist. Ha! Why even make the small one?, they asked, shaming all delicately sized human beings. Why? We are not supposed to live in this thing. This thing on the wrist. We are made to peek, glance, as they say, sometimes, quickly. And then leave it be. Look away. Avert the eyes. We are meant to minimize eye contact with the thing on the wrist. And if so, why get the bigger one? It is meant to disappear. This is my philosophy for the wrist thing. Make it disappear. This thing of metal and glass which has yet to make me a better man.

Can you read on it? they ask. Yes, I say. You can read news on it, I say. But I wouldn’t recommend doing so. Not if you like news. Or reading. Or life. Or the universe. For they are very slow, the small apps that show you news. And they are clumsy. One shoots text into your face, a single word at a time, from your wrist. This thing on the wrist. Out of its infinitude of blackness yellow words fly. But as soon as you spend any time with these apps, these news apps upon the wrist, you realize, quickly, they do not work well. They are not useful. You should not be reading the news on your wrist. You should not be glancing at the news on your wrist. You are rendered impotent. You cannot read the articles. You can only shift the articles to your pocket. You can only make more work for your future self, a self which probably doesn’t care about the thing you see, presently, upon the wrist. And so, no, I do not recommend reading on the thing on the wrist, certainly not the news. It is not yet good. It is not yet smart. It is not yet fast.

I tell them the moon wanes gibbous, and rises in 9 hours and 26 minutes. I tell them the sunset is at 18:30 precisely. I want to point directly to the north but the thing on the wrist has no compass. Still, I am aboriginal, connected punctiliously with nature. We are one. Me and the moon. The high today is twenty-two degrees centigrade. They look at me like I’m crazy.

Oh, they are so downtrodden now, those who asked about the thing, the thing on the wrist. I am the harbinger of technodoom. Knower of useless celestialisms. And I can see in their eyes that they want to hear some accolades. Some uplifting remark. Nothing gibbous. And so I say a single word: Exercise. Like I am selling plastics in 1930. Exercise, I say. And I smile. That is what it does best. But I have to caveat, slumping back into my chair, my posture as the worst salesman ever — Well, I mean, it’s good, or, rather, it has potential. But presently it is very dumb. If you use other exercise apps made for the thing for the pocket, the thing for the hand, for the fingers, such as Moves, they are smart. This thing on the wrist is so dumb, so ignorant of what you’re doing, that if you’re used to the other apps in the pocket, you will be infuriated by its clumsiness. The other apps know all. They know when you run. They know when you bike. You do not need to tell them what you’re doing. This is because they are smart. The thing on the wrist must always be explicitly told what you are doing. Perhaps this will change. Perhaps it will become smart. But for now, it is dumb. Supremely dumb. If you do something and forget to tell it you’re doing it, it is as if you never did it. Sadness, that is what the thing on the wrist, black like the eyes of a crow, brings you in these moments.

And furthermore, I must say, now that I have eased into rant mode, into User Experience mode as the great Judger of Things, I raise my arms, I pound the table, I say: Imagine, now, you turn on the cycling wrist app. And you are cycling. Cars whizz by. And the thing on the wrist is telling you how far you’ve gone, how hard you’re working. This is nice. This is good. You see your heartbeat. It makes sense, finally, the thing on your wrist. So much sense. It gently pings every five kilometers. And then, horror: you get a message from Jack. And you are still cycling. And next time you peek at this thing, the thing on the wrist, because you want to know where you are, how far you’ve gone, how hard you’re working, you will see instead something else. You will see the thing you do not want to see. You will see the message from Jack. And the only way to dismiss the message you do not want is to push a button on the screen. But you are cycling. And the thing on the wrist is on your wrist. So you must use your nose. You must push your nose against the thing on the wrist while cycling to dismiss the message which you do not want to see. Because the thing on the wrist is so dumb. (Taunting, evil.) Why is it trying to kill you? It does not seem to know what you are ever doing. Unless you tell it — I am doing this thing. And then it knows. But then makes bad decisions. And so you press with your nose, and try to not run into cars, babies, police women, but the button doesn’t activate. Your nose is not pointy enough. And you are stuck. Stuck forever with a message about which you can do nothing, from someone named Jack. And who is Jack, anyway? And now the thing on the wrist, the great knower of heartbeats but boob of interaction modes, is useless. And you are thinking about LOST. And you wish you didn’t have the thing on your wrist. You wish you had just put the thing in your pocket on a mount on the handlebars. Because that would work. And it would show you a map, persistently. And the messages incoming would not take over the screen. And it would reliably tell you many other good things. But the thing on the wrist is new. It is there. Strapped on. You are strapped into this new world. This future of screens in places you may not want them. And so you must embrace it. This thing on the wrist. It will not make you better. It will not change your life. Someday, perhaps. The potential is there. But not now. It is still a baby. And so for now, into it we mash our noses. We are optimistic doofuses. It is black like the ocean on a moonless night. It pings softly from the future and says: It is time to stand up. You are a lazy man. I feel your beating heart.

Looking Closely is Everything

How the pandemic taught me to look closely at the world, and how I hope to carry that forward out the other side

Self-Improvement and the Big Walk

Every day a change to be better

A long walk is a framework for monotonous improvement