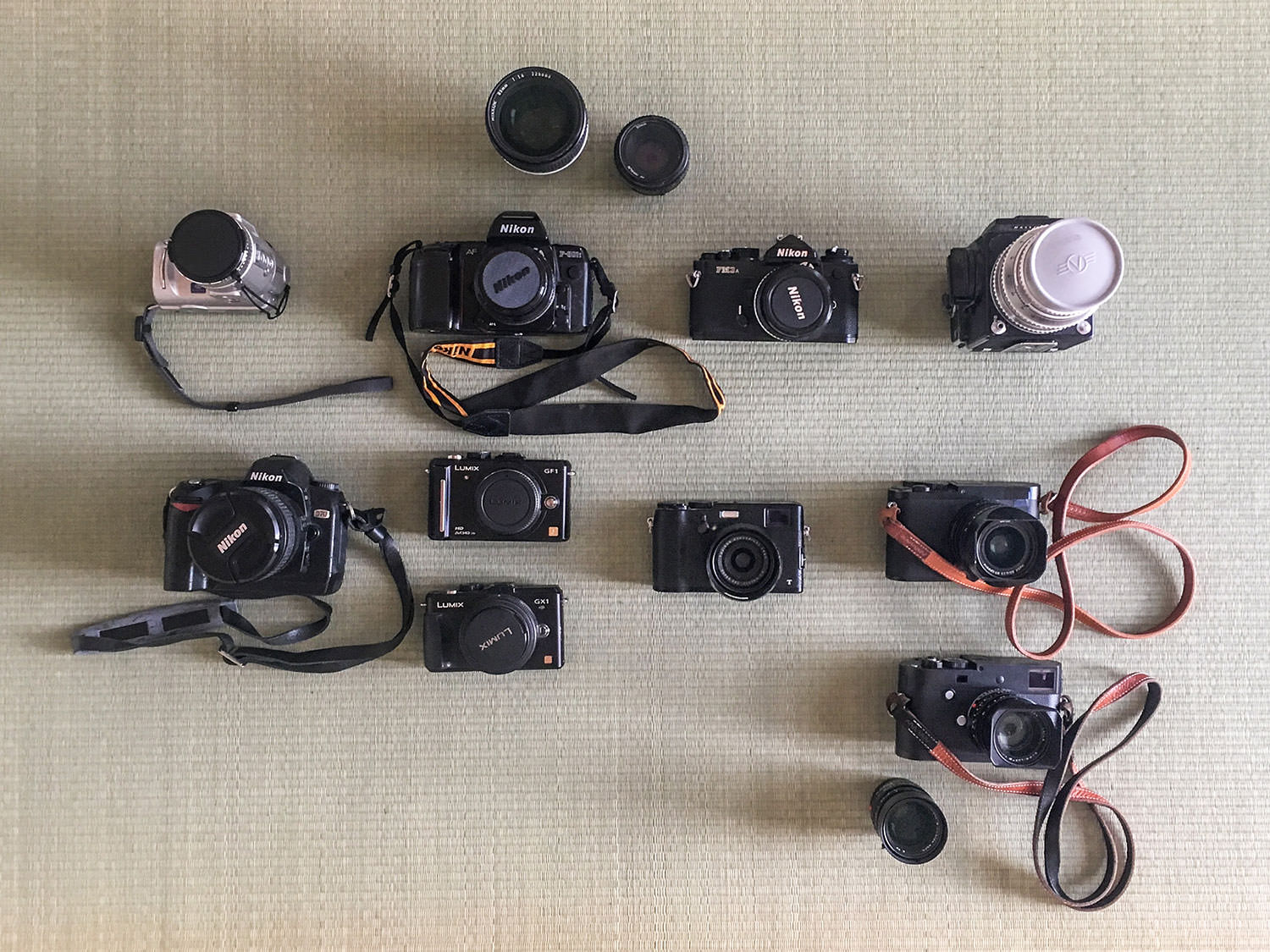 (Above shot with an iPhone SE)

A Life in Cameras

The first camera I blew my savings on was that goofy Sony Cybershot (DSC-F505), 2.1MP, giant barrel, 10x digital zoom (oh boy!). This was back in 2000 when these things took Sony’s proprietary, long, thin memory stick.

The F505 whet the appetite but I quickly realized if I was going to take “real” photos I’d need something beefier. Taught myself photography reading photo.net five hours a day in the computer lab at Waseda University. Grabbed a Nikon F801s autofocus, used, late 80s model, and a 50mm f1.8 and marveled at the images a fast prime could produce. Bokeh upon bokeh on Velvia slide film. Shot a case of it hitchhiking across Japan.1

Nine months later, Nikon (re)released their FM3a; by then I knew I didn’t need autofocus, and this felt like the right tool for all jobs. A perfect mechanical SLR with a simple built-in meter. Still a marvel to hold today. And then a year later, I snagged a Hassy on Ebay, sat over there on the right of that top row.

In 2004 the D70 arrived and Goodbye Film Forever. Gorgeous sensor, could use my old glass. Felt like the future in a way the Sony projected but didn’t deliver on. By this point I had been developing and printing photos in my apartment for years, and was more than happy to shed film and its attendant frustrations / complexities in favor of more quickly arriving at finished images.

From there, the GF1 and GX1, the x100t, an interlude of iPhones — all of which I’ve sold as I’ve upgraded. And, finally, the Q and Monochrom.

To be honest, an iPhone 7+ feels as good, if not better than the GF1/GX1s of the world. And in daylight, it likely exceeds micro 4/3 in quality. Portrait mode on the 7+ is only getting better, and I’d be lying if I didn’t say the most exciting impending camera announcement of 2017 is the iPhone 7s/8.

I realize film is having a resurgence but I don’t miss it, not one iota. I know that’s an unpopular stance, but photographing alone, digitally, is complicated enough. Film is too seductive a siren for me to touch again. But I’m enjoying seeing everyone out there discover/rediscover and keep it alive.

Seventeen years, ten cameras, a billion shots taken or not, a collection of simple tools that grant permission to see the world.

Donuts on the mind biking down the Mirua Peninsula